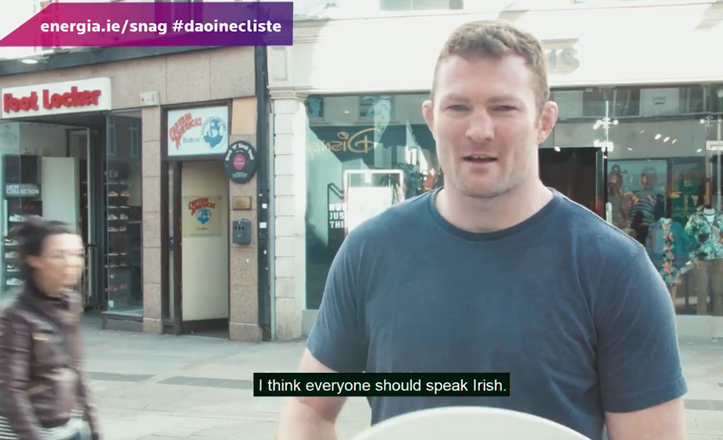 Seachtain na Gaeilge le Energia is well under way with over 30,000 events taking place all over the world from 1 - 17 March to celebrate the Irish language. Energia took to the streets of Dublin and recorded some vox-pops to see just what people’s perceptions of the language are in our capital city. They were soon joined by the legendary Munster & Ireland star Donnacha Ryan who shared two of his favourite Irish words: ‘cabáiste’ & ‘sneachta’. (Video available at www.snag.ie/voxpop)

This is the first year that Energia have been in partnership with the festival and the energy company have started using the Irish language on both their website and in its contact with business customers.

"Promoting the language throughout Ireland makes perfect sense to us – encouraging people to make clever choices is something close to our hearts and we hope people will choose to use their cúpla focal during Seachtain na Gaeilge le Energia 2017."

The vox-pop (snag.ie/voxpop) was filmed on Dublin’s busy Grafton Street and features a variety of different people talking about the Irish language and their own personal views.

"It was great to see the positivity around the Irish language on Grafton Street. Seeing stars like Donnacha Ryan chatting as Gaeilge is great and we’ve been overwhelmed by the amount of celebrities taking part in this year’s festival."

Similar to this video, RTÉ have been producing lots of short videos about the Irish language starring some of the country’s most famous faces. Ronan O’Gara, Stephanie Roche and Nadia Forde have teamed up with them to encourage people to use their cúpla focal during the festival.

With over a week to go in the festival there’s still lots of ways you can take part in using your cúpla focal. There’ll be a Game of Thrones themed table quiz in Club Chonradh na Gaeilge, Dublin, tonight, stand up as Gaeilge tomorrow night and lots more. Check out www.peig.ie for more information.

The biggest event during the festival will be Lá na Meán Sóisialta, Social Media Day. This will take place on 16 March and the Seachtain na Gaeilge le Energia team are encouraging people to send a tweet as Gaeilge on the day and to use the #LNMS17 hashtag. More information about the festival can be found at www.snag.ie.