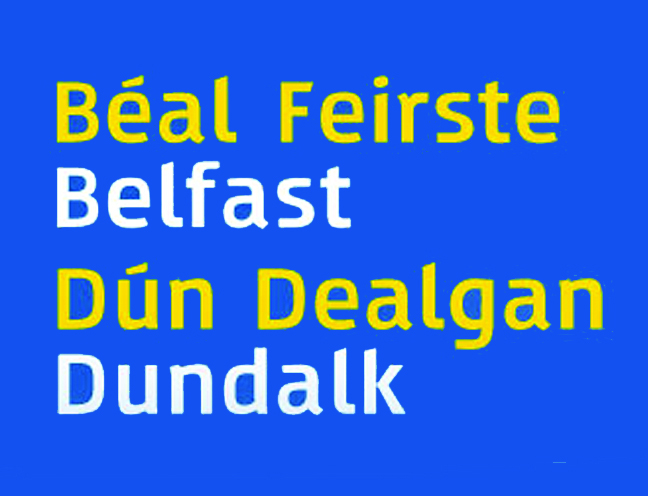 Despite Irish being the first official language of the Republic as per the Constitution of Ireland, and despite the special care taken to ensure Irish is principally prominent in signs under the Official Languages Act 2003, (Section 9) Regulations 2008, the same regulations specifically exclude road traffic signs.

This means that the text in Irish on the majority of road signs in Ireland is smaller, in italics, less visible and / or less legible than the English. This inequality suggests that the first official language of the State has a lower status than English.

Conradh na Gaeilge has been campaigning for equal status for the Irish language on road signs ever since. In 2013, a delegation from the Conradh met with the then Minister for Transport, Tourism and Sport in the south, Leo Varadkar TD, to discuss dual-language signs.

As a result of this meeting, Varadkar was happy to implement Conradh na Gaeilge's recommendations regarding road signs - where the text in Irish would be as large and as prominent as the English - on a trial basis.

These signs would be cost neutral as they would only be erected as and when old signs need to be replaced anyway.

His predecessor Paschal Donohoe, however, cancelled the pilot project.

Show your support for road signs that give equal status to Irish by sending a message to and give the first official language of Ireland its due. Ní neart go cur le chéile!