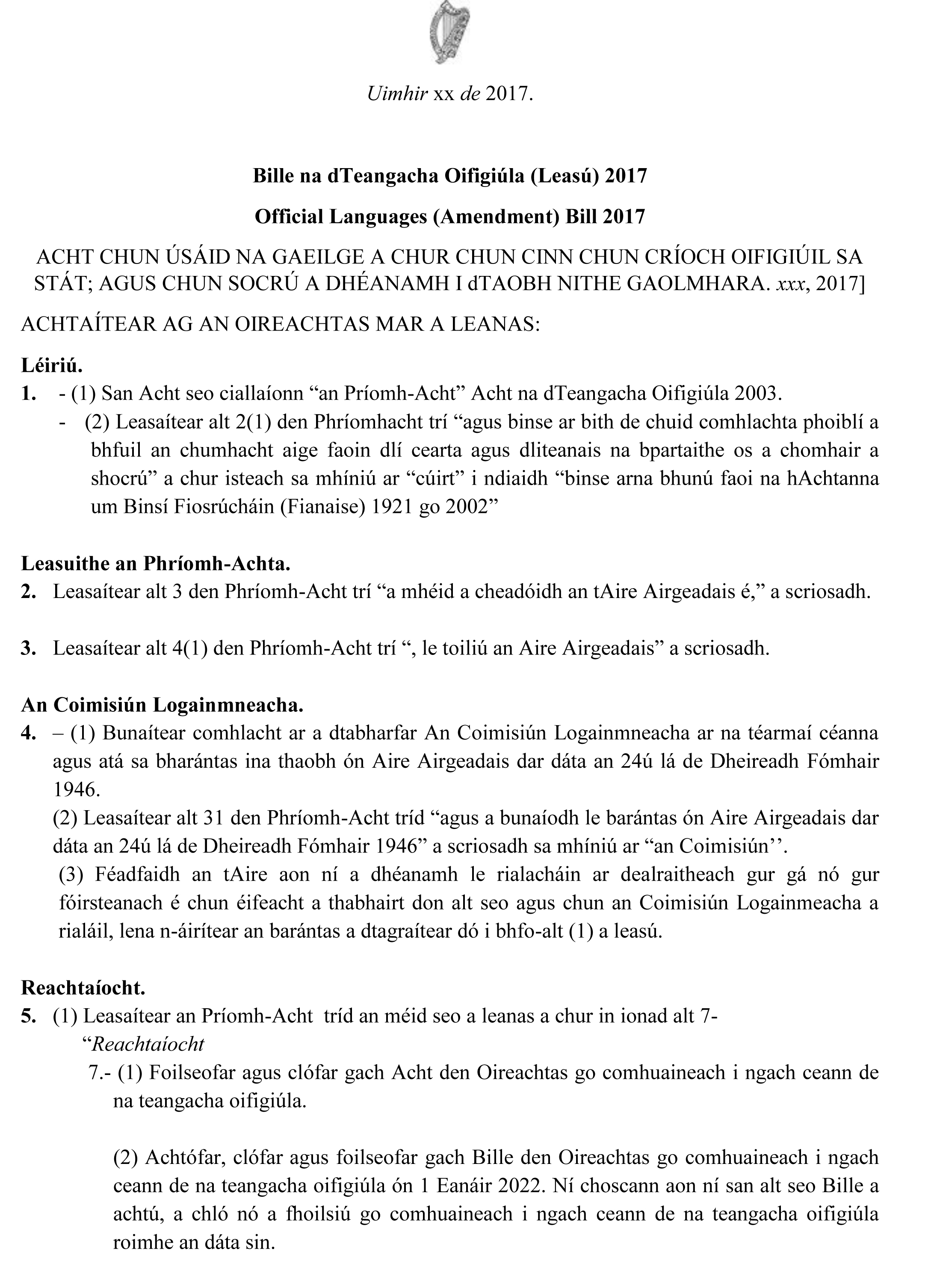 Conradh na Gaeilge has discussed and developed these amendments with politicians and with the Language Commissioner.

Almost all members of the opposition now support these recommendations for the Act, including Fianna Fáil, Sinn Féin, People Before Profit, the Labour Party, the Rural Alliance, the Social Democrats, the Green Party, and Catherine Connolly TD.

The Department of Arts, Heritage Regional, Rural and Gaeltacht Affairs, and the Minister of State for Gaeltacht Affairs, Seán Kyne TD, actively worked both with us and with the opposition to ensure that these proposals were included in the new draft heads of bill which the Government published on 2 June 2017.

Provisions of the Bill
The Conradh na Gaeilge proposals include recommendations made by the Language Commissioner, An Coimisinéir Teanga.

The following recommendations are among the provisions being proposed to strengthen the Act:

* The aim of this provision is to give people the right to use their name and address in either official language of the state when they communicate with public bodies. The state and public bodies will accept whatever name and address that the citizen gives them in either of the official languages and they will ensure accurate spelling, including the accent, especially in all IT systems.

It is now clear that, after almost 15 years of the Official Languages Act, 2003, the legislation urgently needs to be improved upon. There are certain sections of the Act that are not functioning as they should, and other elements that have not been included in the Act at all.

These amendments are being proposed by Conradh na Gaeilge so that the Irish-speaking and Gaeltacht community can depend on the services being provided by the state to them through Irish. The image and status of the Irish language would also be furthermore enhanced in the mind of the general public.

The Official Languages Act, 2003
Putting the Review in Context
Conradh na Gaeilge welcomed the review of the Official Languages Act, 2003, as announced by the former Minister of State Dinny McGinley TD at the beginning of November 2011. We hoped that this would be an opportunity to guarantee a more effective and more comprehensive provision of services through Irish for the Irish-speaking community.

The public had until 31 January 2012 to make a submission to the Department of Arts, Heritage and the Gaeltacht as part of this review. We provided a sample submission and made Conradh na Gaeilge's submission available for people to assist them in filling out their own feedback.

Moreover, there were provisions in the heads of bill for the Official Languages Act 2014 which would have seen services in Irish for the public being reduced, such as the recommendation to extend the 3-year term of the language schemes to 7 years. Since its inception, the language scheme system has produced weak schemes with the Government insisting that the schemes would be improved upon every 3 years.

It was obvious from the submissions and surveys completed by the public as part of the process to review the Official Languages Act in 2012 that they want the legislation protecting their language rights strengthened, not weakened. We pushed the community's recommendations in the weeks that followed the decision about the Language Commissioner.

How Things Now Stand
Official Languages Bill, 2017
Legislation alone will not increase the number of Irish speakers, but effective legislation is a pillar of support for those members of the public that wish to use Irish.

In addition to calling for stronger legislation, Conradh na Gaeilge is constantly working to secure additional funding from both Governments north and south. This primarily takes the form of the investment plan agreed by 80 Irish-language and Gaeltacht groups, a plan which would create over 1,100 jobs and provide the public with increased opportunities to use Irish.