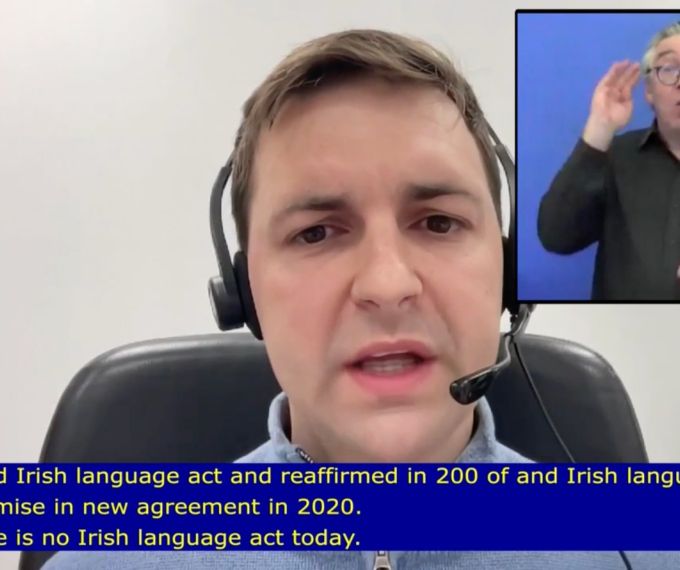 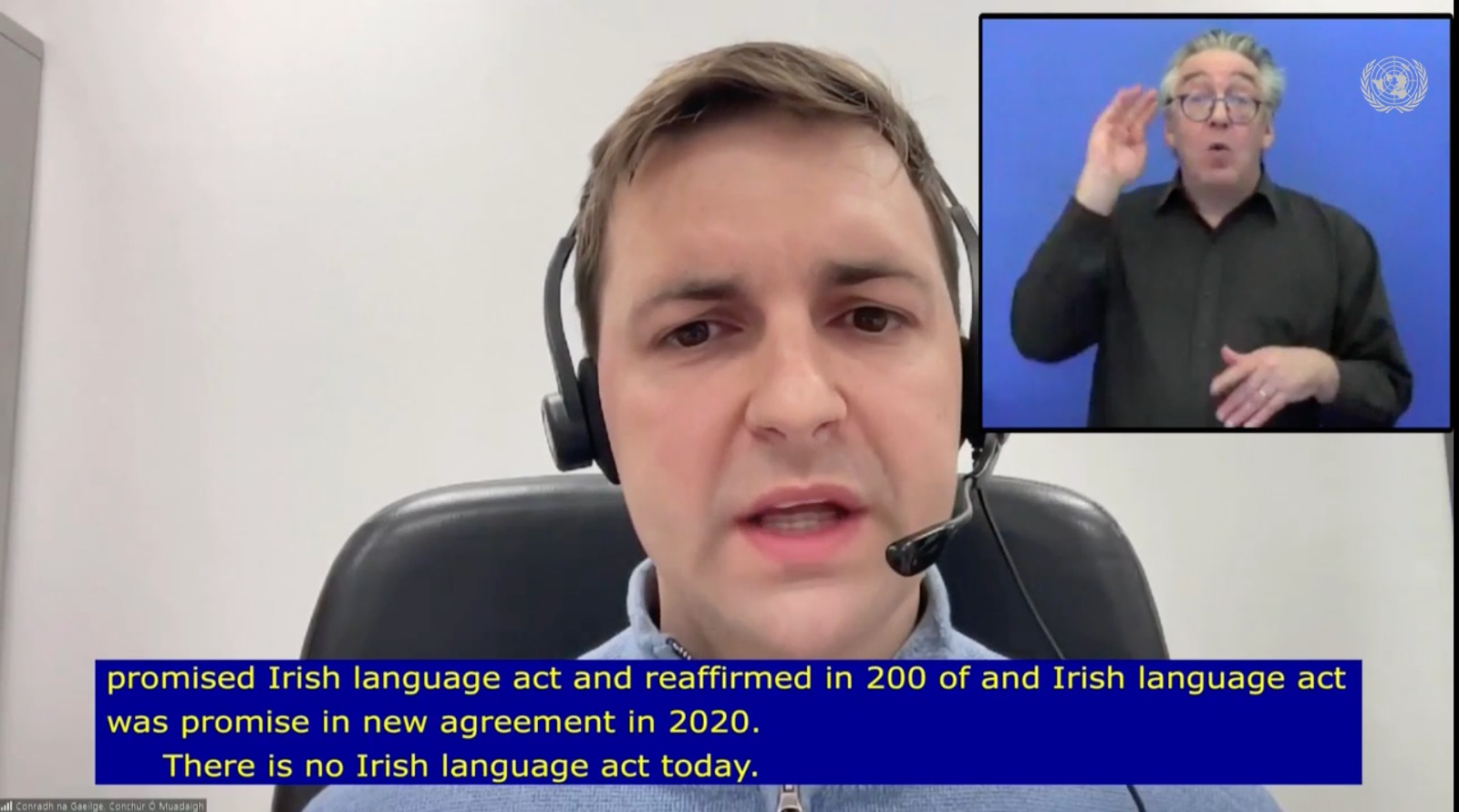 Conradh na Gaeilge address the UN forum on minority issues, Thursday 2 December 2021, exploring the role of states, intergovernmental organisations, civil society and minorities in tackling the root causes of conflict that may be in breach of human rights and international obligations such as the right to equality, minority language rights and prohibition of discrimination. Conchúr Ó Muadaigh will represent Conradh na Gaeilge with hundreds of delegates in attendance alongside Fernand de Varennes, Special Rapporteur on minority issues and Ms. Victoria Donda, Chairperson of the Forum on Minority Issues.

“I welcome the opportunity to speak at the UN Forum on Minority Issues about the Irish language as a minoritised language here, in the context of a post-conflict society, and the role of the Irish language in all of Ireland’s major peace agreements. This Forum is a space that promotes equality, diversity and minority rights, and we will seek a United Nations intervention in support of our community-based campaign for an Irish language Act.”

“We will reinforce the fundamental principle that international law and obligations must be adhered to, and agreements honoured. We believe the British Government have been in consistent breach of their international obligations on language rights for Irish speakers for decades, and have left many of their binding duties as co-guarantors of our peace agreements unfulfilled and void of practical effect. 23 years on from the Good Friday Agreement, the ongoing denial of language rights can no longer be allowed to continue. Irish language speakers, and indeed similar communities across the world, must continue to challenge hostility, sectarianism and marginalisation, if we are to see a future built on tolerance, mutual respect, and comprehensive protection of minorities.”

Conradh na Gaeilge will call on this Forum to:

It is my honour to be here on behalf of Conradh na Gaeilge, but my expertise comes from being an Irish speaker in a state which has, since its formation in 1921, outlawed, repressed and denigrated our language and frustrated the rights of our community. It is for that reason that I have deliberately described Irish as a minortised language - a deliberate act of attempted linguicide and not a manifestation of linguistic preference.

In spite of that, I was educated through the medium of Irish in a community-run school set up by activists and parents.

I’m now a father raising my own child through Irish.

His first language will be Irish and this will be the first time for this to happen in our family since the 19th century. I speak to you with the experience of living a life through Irish in a hostile political environment.

That the Irish language community in Ireland is represented here today, at a 'Forum on Minority Issues', is an indication of how successful the colonial policy of repressing Irish identity and culture has been over the centuries.

The 14th century Statutes of Kilkenny and the 17th and 18th Century Penal Laws were key moments in the cultural colonisation of Ireland. Such laws were a calculated attempt of cultural colonisation and were to a large extent, successful. Irish speakers were marginalised and excluded from public life; they were banned and prosecuted for using, educating and living through their native tongue. Despite these repressive measures, more than half the population remained Irish speaking according to the census of 1841.

However, the Great Hunger 1845-51 effectively decimated Irish-speaking Ireland through death and emigration. The formation of the National Schools by the British Government, which forbade the teaching of Irish, were a further blow to the Irish speaking population.

The formation of Conradh na Gaeilge in 1893 and the cultural revival of the late 19th Century which it inspired, as well as the establishment of the Irish State in 1921 managed to reverse some of the legislative and practical barriers facing the development of the language - and provide it with official status in the southern part of Ireland.

However, the remaining six north-eastern counties formed part of the newly established ‘Northern Ireland’ - part of the British state, and under the control of a 'unionist' regime that considered the Irish language an existential threat that promoted disloyalty and an ‘anti-British counter culture’. This state removed all funding for the language, banned Irish language street names, censored textbooks and threatened the imprisonment of speakers and school founders.

But my community is proud, determined and talented; we have never waited on permission to assert our rights or our ancient cultural identity.

This year we are celebrating the 50th anniversary of the establishment of our first Irish medium Primary School, Bunscoil Phobal Feirste. The founders of that school faced incredible resistance from the British state and from the Education Department, and were threatened with imprisonment. It would take that school until 1984 to be recognised as an official school.

Today, we have over 30 Irish Medium Schools, with over 7,000 pupils, making it the fastest growing education sector in the state.

Following a 30 year conflict, the Good Friday Agreement was signed in 1998. There was genuine hope that language would be ‘brought in from the cold'. A new era of equality was promised for the Irish language and specific and strong commitments were given regarding the promotion and protection of the language particularly in education.

Yet the facts speak for themselves.

The GFA provided a statutory duty on the Department of Education to "encourage and facilitate" the growth of the Irish-medium sector. Today, around 60% of our schools are based in temporary accommodation, with many heavily oversubscribed with no coherent strategy to address the demand from the statutory bodies. There is still no provision for linguistically appropriate special needs support in Irish-medium schools.

The GFA promised to remove restrictions which discouraged the maintenance and development of the language. Instead, we have faced continued denigration by public representatives, including government Ministers, who have withdrawn funding from Irish language schemes and painted our demand for rights as a demand for "preferential treatment".

I would like to be standing in front of you telling you that the peace process was a catalyst in the growth of the Irish language. Unfortunately, the collapse of our government - and its 3 year suspension from 2017 - was a direct consequence of the refusal of both the British government and the NI Executive to honour its legal obligations to provide formal recognition to the Irish language.

Although political parties and the British government try to assure us that such legislation is pending, 16 years of missed deadlines, unfulfilled commitments and false dawns tell us otherwise. Our community is justifiably sceptical of the British Government and the political institution's ability to deliver on language rights. The British Government ratified the Council of Europe’s Charter for Regional and Minority languages in 2001. In each and every monitoring report from the Council's Committee of Experts, COMEX have been consistently critical of the British Government for their lack of compliance on the core components of the Charter. UN oversight bodies have been equally critical of their approach to language rights.

We place little value on formal commitments; we value action.

Discrimination against the Irish language community did not end with the signing of our peace agreement; colonial legacies were not wiped clean by the signatures of politicians and heads of state on an international agreement. We suspected this before and we know it to be true now.

For international law to be adhered to, and agreements honoured, constant vigilance from communities like ours - and forums like yours - is necessary.  This is the only way to ensure Irish language speakers in the north of Ireland, and minorities across the world, can effectively challenge hostility, sectarianism and marginalisation.

We therefore call on this Forum to: