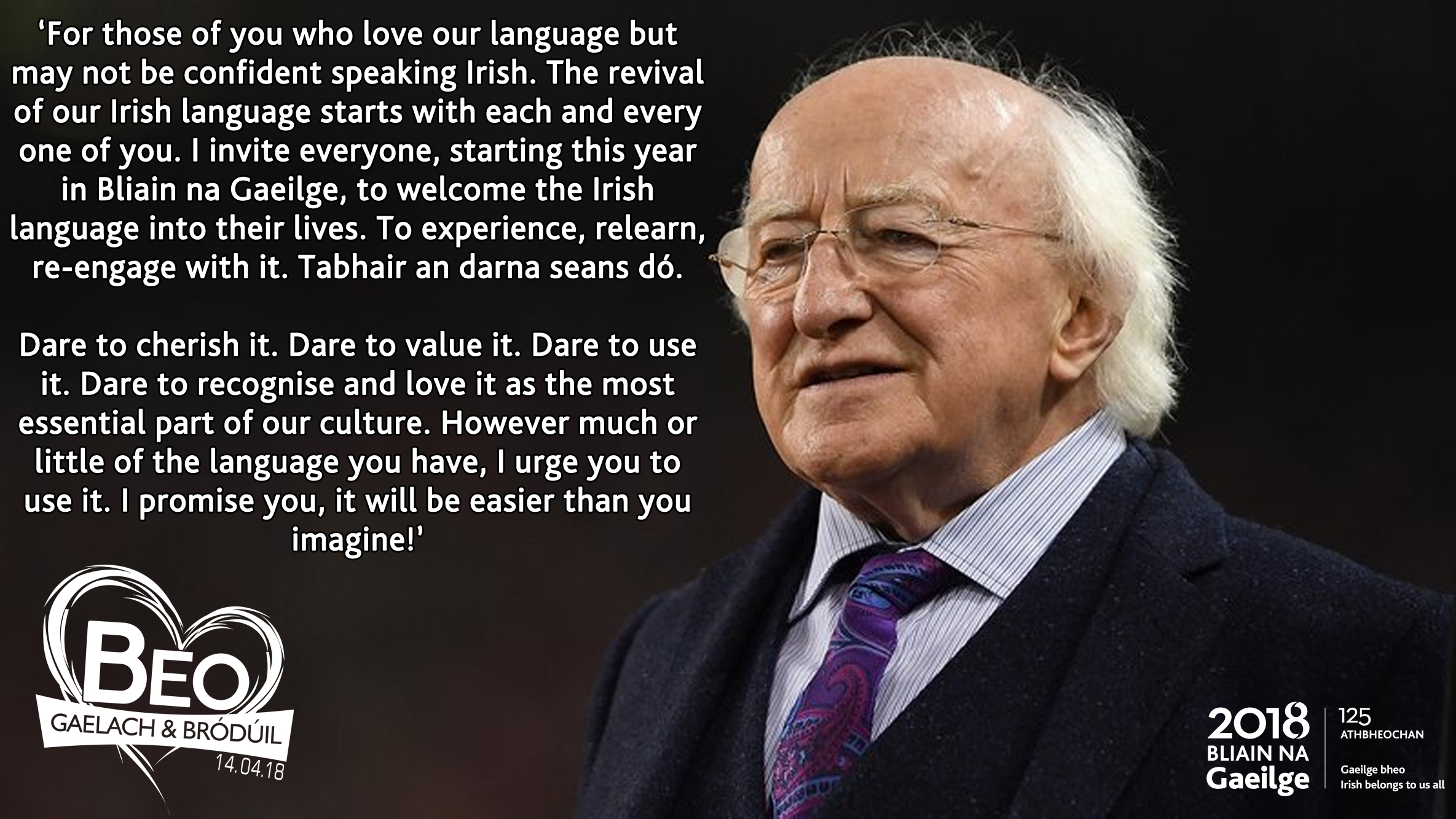 Thousands gathered in the city today to celebrate the living language and its vibrant community.  The crowds walked from Parnell Square to Merrion Square, where President Micheál D. Ó hUigín addressed the crowd, along with other ambassadors and representatives.

The crowd and residents of Dublin city enjoyed live music from Scannal, Delorentos and Kíla, as well as a new Irish language version of the pop hit “Teenage Dirtbag” (“Stócach Brocach” as Gaeilge), newly recorded by Wheatus this week as part of CEOL 2018 .

Speakers, young and old, took to the stage - amongst them were representatives from the Gaeltacht; from language groups around the country; and from sports clubs, as well as Bliain na Gaeilge Ambassadors Eoghan McDermott (2FM), Bláthnaid Ní Chofaigh (RTÉ) and Lynette Fay (BBC).  President Michael D. Ó hUigín gave a powerful address to the crowd.

“For those of you who love our language but may not be confident speaking Irish. The revival of our Irish language starts with each and every one of you. I invite everyone, starting this year in Bliain na Gaeilge, to welcome the Irish language into their lives. To experience, relearn, reengage with it. Tabhair an tarna seans dó. Dare to cherish it. Dare to value it. Dare to use it. Dare to recognise and love it as the most essential part of our culture. However much or little of the language you have, I urge you to use it. I promise you, it will be easier than you imagine!”

The festival showcased the strength of the Irish speaking community, who travelled to the capital on busses from all over the country - people from Gaeltacht areas, parents and children from Gaelscoileanna, sports clubs, community groups and those who wished to show the support for the language.

“We are here to celebrate the Irish language, our national language, the heart and soul of this country. 125 years on from the the beginning of the revival, there is so much to celebrate and to give recognition to, though there is still far to go.  We are now at a new stage in the revival - and it begins with groups such as Na Gaeil Óga here in Dublin, Gaeil na Gaillimhe, An Crann Óg in Gaoth Dóbhair, Laochra Loch Lao, and, of course Carn Tóchair – a new generation who are promoting the language in everyday settings, and who are setting an example for the whole country.”

Today presents us with another positive story, as results from a Kantar Millward Brown survey were published this morning, which show that two in three people in the south and almost half of people in the north believe that the State should provide more support for the Irish language - a significant increase since 2015.

“There was an incredible atmosphere in the city today, and the vibrancy of the Irish speaking community was showcased wonderfully.  It is also clear that the general public’s opinion of the language is changing, as we can see from the Kantar Millward Brown survey results - people support strongly Irish medium education, public services as Gaeilge and support for the Gaeltacht, which will allow for the growth and development of this inspiring community.”

Bliain na Gaeilge is a community project that has over 50 Irish-language, Gaeltacht, and cultural groups taking part in the organisation of the project, including the GAA, TG4, USI and RTÉ. The Government of Ireland is also officially supporting Bliain na Gaeilge and a committee has been formed to coordinate that support. The Department of Culture, Heritage and the Gaeltacht is providing funding via Foras na Gaeilge for the year.

Kantar Millward Brown conducted and all-Ireland survey on behalf of Conradh na Gaeilge. The topics  covered included the participants relationship with the language, their views on the Gaeltacht, their interest in speaking the language, and the role of the media in promoting the language.  The interviews were conducted face to face, in the homes of participants, with adults over the age of 15 in the Republic and over 16 in the North of Ireland. The margin of error in these surveys is +/- 3.1%.


Conradh na Gaeilge is the democratic forum for the Irish-speaking community. The Conradh has over 200 branches and numerous individual members registered around the world, members that work hard to promote the use of Irish in their own areas. Conradh na Gaeilge’s main aim is to promote the use of Irish as the standard language in Ireland. Conradh na Gaeilge was established by Douglas Hyde, Eoin Mac Néill, and their colleagues on the 31st of July 1893. The organisation runs Irish-language courses; advocates for the language rights of Irish-speakers; raises awareness about the language; hosts the international Irish-language festival Seachtain na Gaeilge; manages the Irish-language information hub PEIG.ie and the Irish-language bookshop An Siopa Leabhar; supports Raidió Rí-Rá; and much more. More information: www.cnag.ie