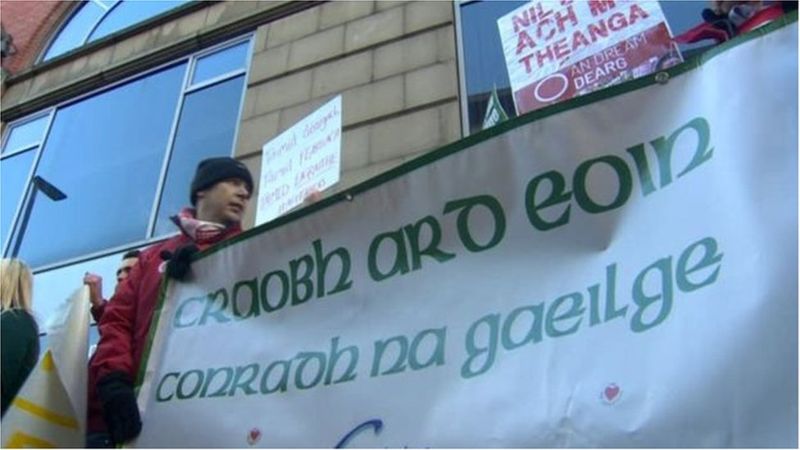 Conradh na Gaeilge have welcomed the action announced by the Equality Commission to investigate the Department of Communities decisions regarding the Irish-language Líofa bursary scheme.

“Conradh na Gaeilge welcomes the news that the Equality Commission will investigate the Department of Communities decisions regarding the Líofa scheme and we look forward to studying the report when complete. This cross-community, means-tested, scheme was launched to provide learning opportunities for young people, the most disadvantaged young people in our society. This was not just an attack on the Irish-language, but on those young people who wished to access funding to facilitate emersion learning opportunities in the Gaeltacht. This was just the latest in a long line of attacks from DUP Ministers on the Irish-language and Irish-medium education. This pattern nor this approach cannot continue. The future of Irish-medium school or community based schemes cannot be left open to attacks against the language or the community; the only resolution is that of legislative, rights-based protections for the language.”

“The Líofa case highlights, maybe more so than any other case, the urgent need for rights-based legislative protection for the Irish-language. Since we received the email notifying us of the Líofa decision Conradh na Gaeilge has been lobbying continuously for an Irish-language Act; with the demand for an Irish-language Act in the north now being unprecedented. Since Christmas this year, thousands have taken to the streets to call for the Act; there has been protests and demonstrations in Newry, in Derry, at Stormont and over 12,000 on the streets of Belfast; all of those supporting calls for rights-based legislation for the Irish language. Already, 5 parties alongside a majority 50 of the 90 newly-elected MLAs support protective legislation for the Irish-language in the form of an Act. There is support also from both the Council of Europe and the United Nations for legislation that was promised over ten years ago in the St Andrew’s Agreement.”