“It is clear that the implementation of the Government’s 20 Year Strategy for the Irish Language is not succeeding and that the main reason for this failure is the Irish Government’s lack of investment in the Strategy since 2010. The result of this lack of investment is a crisis in the Gaeltacht. When Government embarks on a new strategy in any other sector, as was done recently with rural development, an assessment is made of the resources necessary to implement the strategy and an extra budget is provided. The 20 Year Strategy for the Irish language was hobbled from the beginning because no extra resources were made available. In fact, not only were extra resources not provided, the two main state organisations charged with the implementation of the strategy suffered significant budget cuts (the capital budget of Údarás na Gaeltachta was cut from €18 million in 2010 to €7 million in 2016, and Foras na Gaeilge’s budget was cut from €18.2 million in 2010 to €14.5 million in 2016).

Conradh na Gaeilge is asking the Government to face up to the challenge reflected in the census figures by funding the investment plan agreed by 80 Irish language and Gaeltacht groups. A majority of Teachtaí Dála are in favour of this investment already. This plan would increase the number of Irish speakers and would give the Strategy a chance of success.”

“We shouldn’t lose all hope as a result of today’s census results. There was an 0.8% increase in the number of people speaking Irish weekly outside of the education system. In addition, we shouldn’t forget that the overall percentage of the population with Irish has grown from less than 20% 100 years ago to 40% today. This is a firm foundation for progress, but unless the Government makes the Gaeltacht and the Irish language a priority and fully funds the investment plan agreed by over 80 Irish language and Gaeltacht groups, we cannot succeed in meeting the current challenges inside and outside the Gaeltacht”

Conradh na Gaeilge is seeking an emergency meeting with an Taoiseach, Chairman of the cabinet committee with responsibility for the implementation of the 20 Year Strategy for the Irish Language, to discuss the results of the census and to seek and agree on the funding of the investment plan. 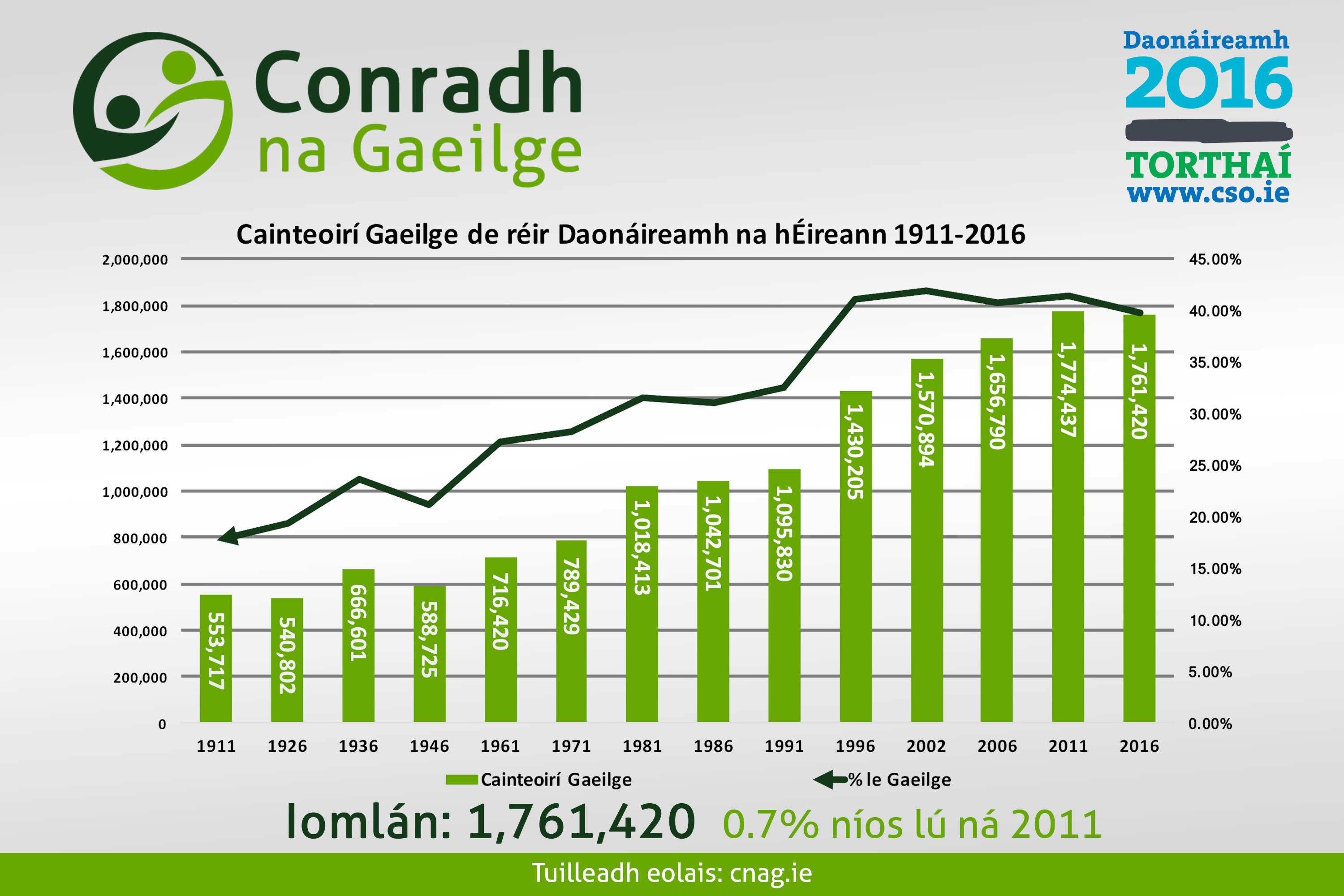