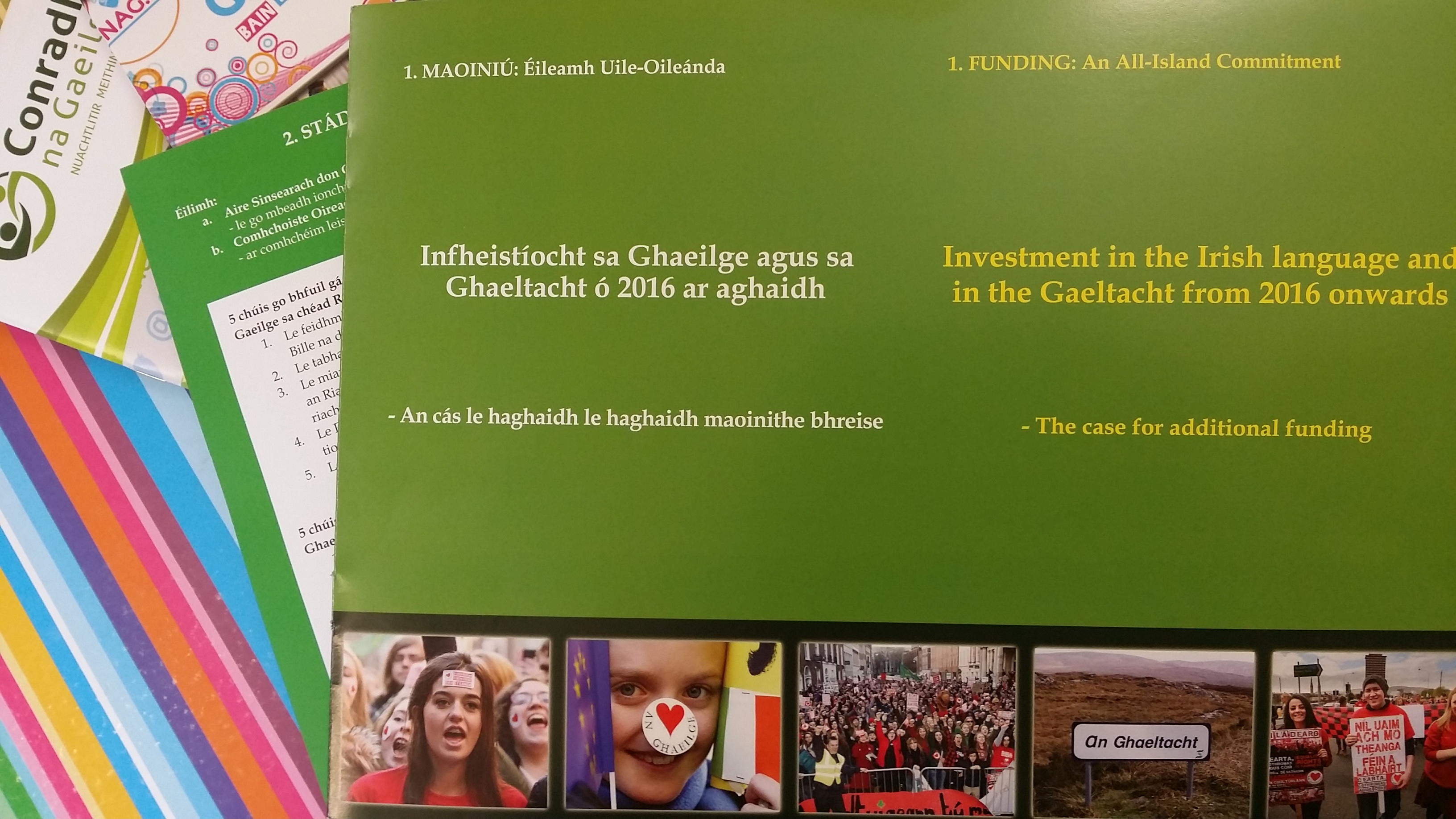 Politicians in the south – including Mícheál Martin TD of Fianna Fáil, Seán Kyne TD of Fine Gael, Robert Dowds TD of Labour, and representatives from other political parties – will congregate in Mansion House, Dublin, at 2.00pm today (Tuesday, 6 October 2015) to discuss an all-island investment plan that could create over 1,160 jobs and provide a huge variety of opportunities for the public to use the Irish language.

The investment plan is being proposed by over 70 Irish-language and Gaeltacht groups, including community and all-island organisations and their funding authorities, and the groups are looking for all political parties to show their support for the plan in their general election manifestos.

The community and all-island organisations are also looking for representative commitments to ensure that the investment plan is acted upon, including the appointment of Senior Ministers north and south to act on behalf of the Irish language and the Gaeltacht and to ensure that the plan is well managed and implemented in full.

“The Dublin Government is planning to spend €1.5 billion more next year – we want to ensure that the Irish language and the Gaeltacht communities’ needs are addressed as part of this. With a small investment, the plan would return a huge employment boost and provide many more opportunities for the public to use Irish, or to learn the language. This is why Conradh na Gaeilge are calling on every political party – north and south – to commit to funding this all-island investment in the Irish language community.”

“The Irish people have repeatedly reiterated their support for the Irish language in various reports and surveys, and indeed they have even indicated lately that more funding should be provided to this end, but the public also want and need more chances to use the language. The targeted funding being sought in this investment plan would afford communities across the country further opportunities to speak and learn the language, especially at a local level.

“This is the first time that the Irish-language and Gaeltacht organisations within the community have agreed on specific schemes and projects with the relevant authorities, in order to make the most significant progress and to achieve the best value for money possible, based on all the expertise and experience in the sector; now all we need is for our political representatives to support the advice coming from these grassroots groups and to commit to investing in the language and in the Gaeltacht.”

Conradh na Gaeilge and the 70+ groups involved in the Irish-language and Gaeltacht investment plan being launched in Mansion House, Dublin, today (6 October 2015) are calling on all political parties north and south to pledge their support for the commitments sought in the plan, and for general election candidates and their political parties to include the specific commitments in their election manifestos.

The budgets of both Foras na Gaeilge and Údarás na Gaeltachta were reduced substantially in recent years, while at the same time there was a broadening of their responsibilities and additional duties to protect and promote the Irish language and the Gaeltacht were placed upon them. New government policies and legislation such as The 20 Year Strategy for the Irish Language 2010-2030 and The Gaeltacht Act 2012 in the south, and The Strategy to Improve and Protect the Development of the Irish Language 2015-2035 in the north, had significant resource implications for both Foras na Gaeilge and Údarás na Gaeltachta, though these Irish-language and Gaeltacht authorities were not provided with any additional resources necessary for the implementation of these programmes, rather their respective budgets have been severely cut in recent years.

Some relevant results of the island of Ireland survey, Attitudes towards the Irish Language and Irish language policy, conducted by Paul Moran of Millward Brown on behalf of Conradh na Gaeilge in 2015: