100 years later – but this time, it is the Irish Government that is making second-class citizens of those who wish to use Irish 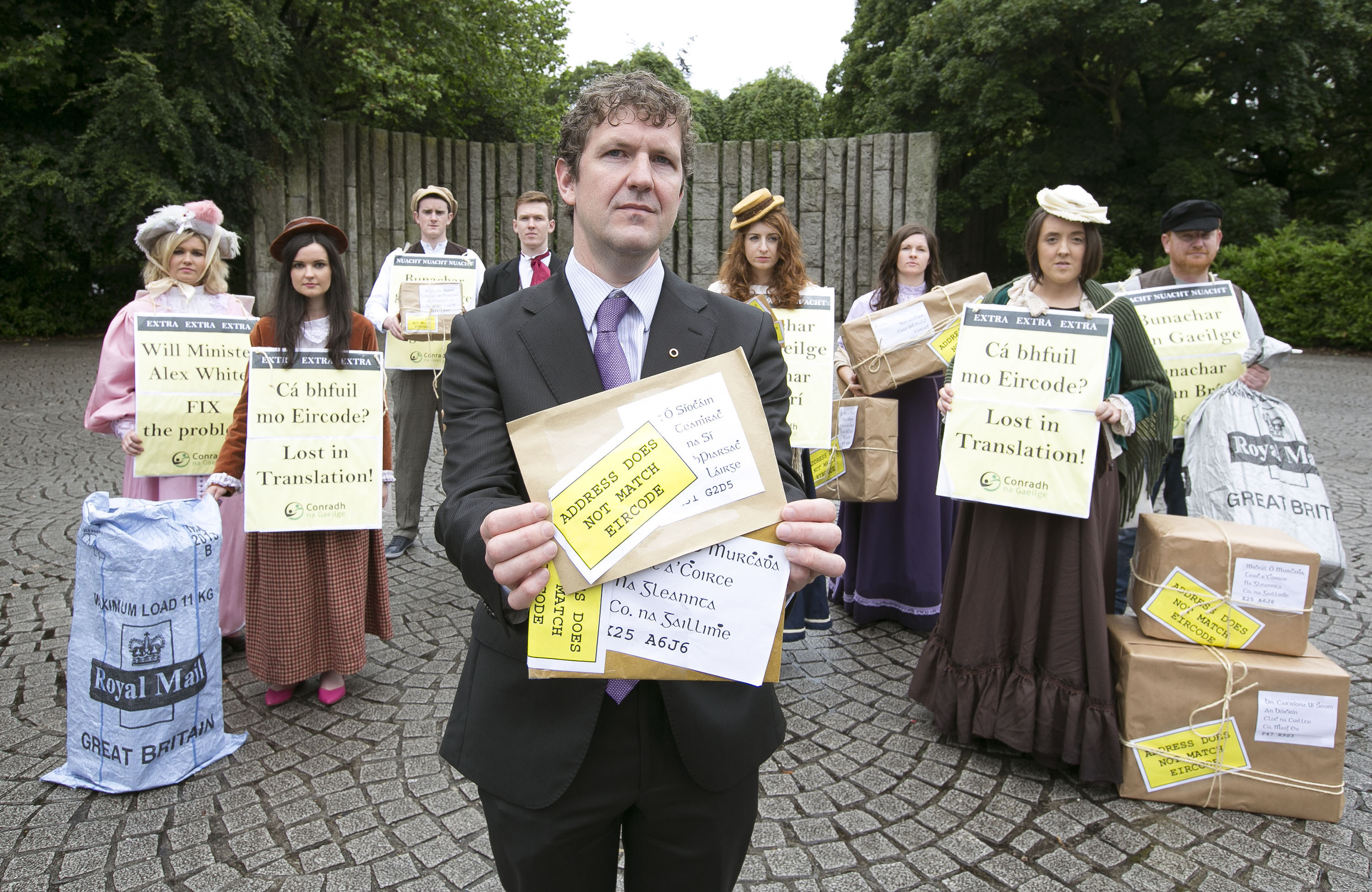 Conradh na Gaeilge is calling on the Minister of Communications, Energy & Natural Resources to rectify the thousands of gaps and inaccuracies as regards addresses in Irish in the database of the new €27 million Irish postcode system, and the Conradh will make that call today at the launch of the new Eircode system at the Shelbourne Hotel, Dublin, 9.30am Monday, 13 July 2015.

Up to 50,000 placenames are inaccurate or completely missing from the database in use by the Eircode system, but despite this, and despite €27 million having been allocated to the new postcode system, the Department of Communications, Energy & Natural Resources is accepting the deficient postcode system and is refusing to fund a proposal to correct the database. Conradh na Gaeilge is calling on the Minister for Communications, Alex White TD, to urgently fund the plan, prepared by a working group of relevant stakeholders*, which would rectify the problem over two years.

“Conradh na Gaeilge had to organise the parcel campaign in the GPO a hundred years ago to compel the British Government to allow letters addressed in Irish to be delivered through the Royal Mail in 1910. It is scandalous to think that we now have to organise a campaign against Ireland’s own Department of Communications a hundred years later because the new postcode system for Ireland won’t acknowledge the Irish-speaking and Gaeltacht community. The Department is treating those of who wish to use Irish in our lives as second class citizens in our own country.”

Conradh na Gaeilge welcomed the decision in 2007 to develop a new postcode system in the south, and took a proactive role in the discussions from the get-go in an effort to ensure that the Irish language would be accurate in the new system, and that the Irish-speaking and Gaeltacht community would not be adversely affected by its introduction. The Conradh is pleased that the postcodes will themselves be language neutral and that Capita Ireland – the private company appointed by the Government to develop the Eircode – will be using bilingual promotional materials.

As early as 2014, however, it became apparent that there were thousands of instances of missing information and a substantial number of the inaccurate placenames in the Irish version of the database that the Eircode system would be using, and the working group of the relevant stakeholders* sent a plan to rectify the issue over the course of two years to the Department of Communications in March 2015; the Department is currently refusing to fund the plan.

“There could be up to 50,000 or more gaps in information and inaccurate placenames in the database being used by the Eircode system. This means that hundreds of thousands of citizens will not have their addresses in Irish linked to the new Eircode that they will receive from the state soon, or else that address could be completely incorrect.

“If a database were being used that consisted of a list of accurate placenames in Irish, with approximately 50,000 gaps in the English version, there would be uproar, and you can be certain the situation would be immediately rectified. The Department of Communications is refusing to resolve this issue, despite having a resolution to hand; this is yet another example of the state system treating those looking to use Irish in their lives unfairly.”