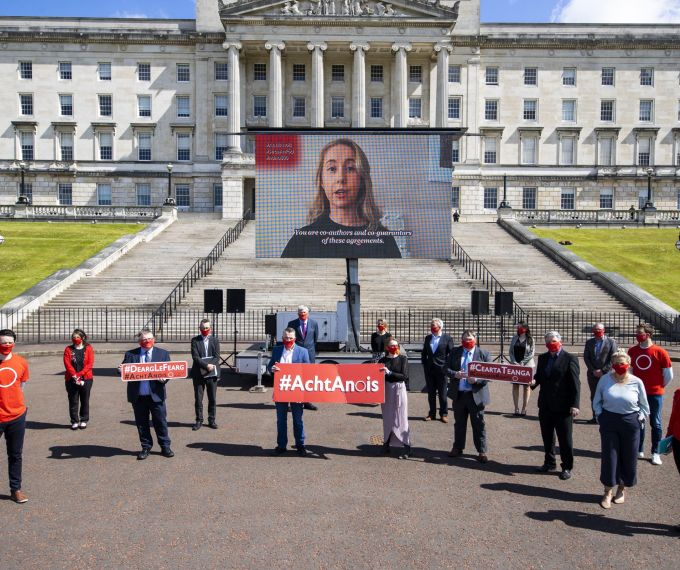 Conradh na Gaeilge has criticised the British Government in the strongest terms after reneging on their commitment to implement the New Decade New Approach Irish Language Legislation at Westminster before the end of the Assembly mandate. That mandate came to a close over the weekend and although the NIO had previously confirmed the legislation was fully drafted and was awaiting parliamentary time to proceed, a letter written by NIO Minister Conor Burns MP to NI Affairs Committee Chair Simon Hoare MP confirmed the Government would not be doing so this side of the Stormont election: "Due to pressures on the parliamentary timetable, including legislation on the situation in Ukraine, it has regrettably not been possible to do so" (Minister Conor Burns MP).  The letter can be accessed here:

Conradh na Gaeilge believes the British Government had adequate time and opportunities to bring forward this legislation since the commitment was given by SOS Brandon Lewis MP in June 2021 and that a lack of political will, rather than a lack of time, is to blame for the ongoing delay.

“Since meeting with Brandon Lewis last summer we have had total radio silence from both NIO Ministers. The fact that the NIO could not update our community directly on the latest decision to delay this legislation adds insult to injury. Let there be no doubt, the British Government have had the best part of 6 months to bring forward this legislation before the mandate ended, and have missed every deadline throughout. If you start counting at the St Andrew’s Agreement, they have had the best part of 16 years to do this. At every juncture they have decided not to prioritise this legislation, or to kick it further down the line to suit their own political agenda. We aren’t surprised. We told them time and time again if not resolved, this issue would re-emerge throughout the election and afterwards remain a core outstanding issue. They decided not to act on that. Our community will continue to organise and ensure this issue remains to the fore during the election and throughout the following negotiations to form a new Executive.

“We have a responsibility to our community to call a spade a spade. This most recent act of deceit from the British Government on Irish language rights is an incredible insult to us all and has left the credibility of this Government in ruin. It is an entirely reasonable and legitimate position to expect democratic Governments to stick to their promises and to uphold deadlines they themselves publicly commit to. The British Government has a horrendous reputation when it comes to the Irish language. They reside over a 3 century old Penal Law banning Irish in our courts, whilst similar acts have been repealed decades ago in Wales and Scotland; and they have been consistently criticised by international experts for failing to implement their international obligations under treaties and charters they have ratified in domestic law. Hundreds of bills have been introduced or discussed before parliament in the current session, and given this bill was pre-agreed in NDNA and guaranteed ‘accelerated passage’, to say now they have no time to bring in Irish language legislation is an incredibly disingenuous position to take. The Irish Government, as co-guarantors of all these agreements, must also make their voice heard, loud and clear on this issue.”

“We will now be working hard in the coming weeks to secure new commitments from local parties to an Irish language Act, an Irish language strategy and to developing Irish Medium Education as part of their upcoming Assembly Election manifestos.”