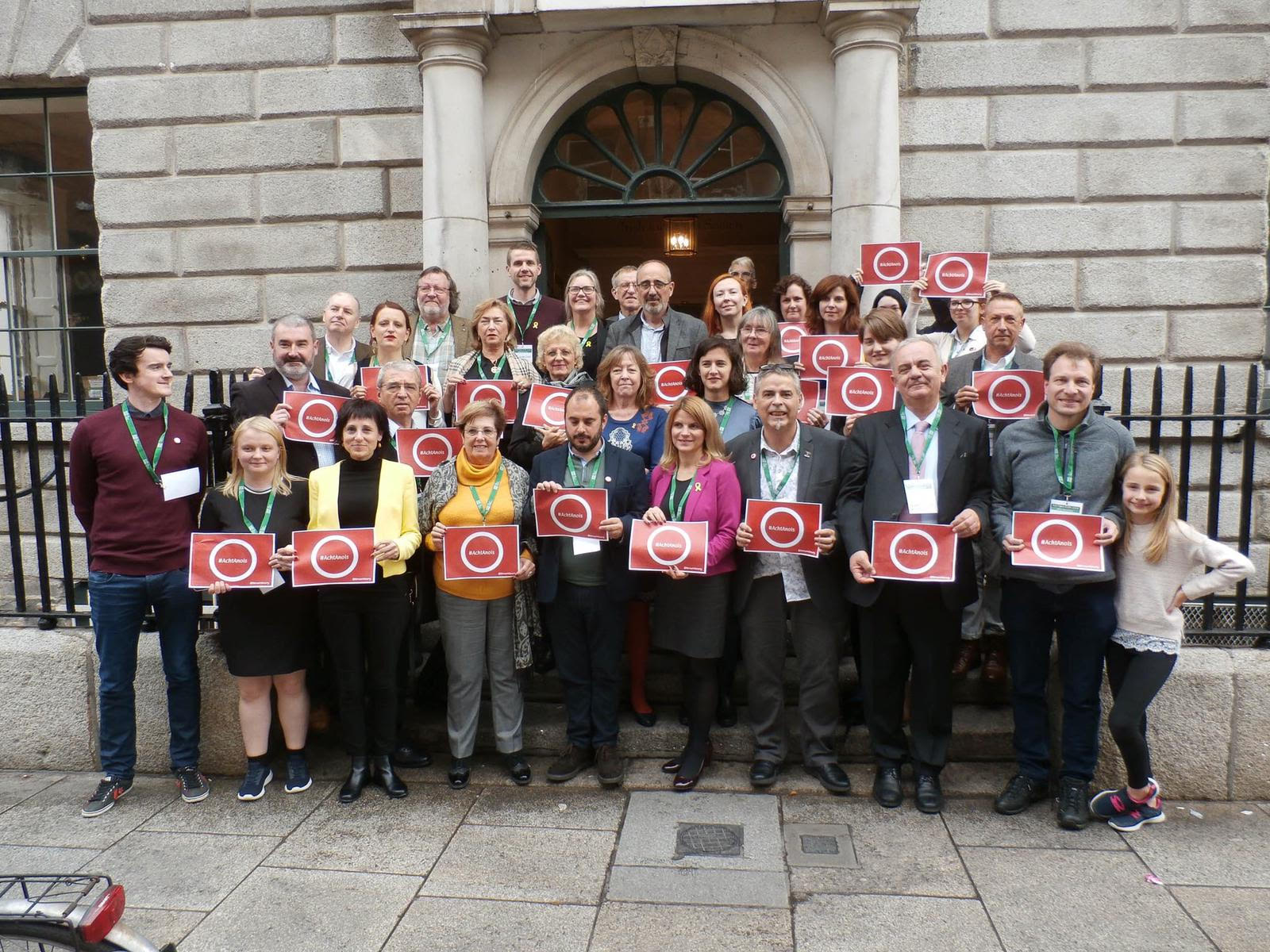 A resolution, supporting the implementation of an Irish language Act in the north of Ireland, has been unanimously passed by the European Language Equality Network (ELEN). The ELEN General Assembly, representing 45 lesser-used languages with 150 member organisations in 23 European states, hosted by Conradh na Gaeilge, welcomed over 40 delegates to Dublin this weekend (Fri 2nd – Sun 4th November 2018), and included keynote addresses from Sixto Molina, Head of Secretariat of European Charter for Regional and Minority Languages, Council of Europe, alongside MEPs Jill Evans (Plaid Cymru) and Martina Anderson (Sinn Féin).

The resolution regarding an Irish Language Act, as proposed by ELEN member Conradh na Gaeilge, reads:

Is cearta daonna iad cearta teanga agus tá cothrom na féinne tuilte ag lucht labhartha na Gaeilge. (Language rights are human rights and the Irish speaking community are entitled to equality). Under the St Andrews Agreement of 2006 the British government pledged to introduce an ‘Irish Language Act based on the experiences of Wales and the Republic of Ireland’. ELEN calls upon the British Government to uphold its commitment by introducing an Irish Language Act if power-sharing institutions are not restored within six months?

The ELEN General Assembly also welcomed Daniel Holder, who re-launched research carried out by Conradh na Gaeilge, alongside the Committee for the Administration of Justice (CAJ), based on an audit of Local Council compliance with a newly compiled Irish Language Framework. The research, carried out since the introduction of the new “super-councils” highlights the divergence of compliance with both local and international treaties in relation to the Irish language.

“Conradh na Gaeilge is continuously exhausting all possible avenues to ensure the full implementation of the 2006 St Andrews Agreement, which promised an ‘Irish Language Act based on the experiences of Wales and the Republic of Ireland’. The support from the European Languages Equality Network ELEN further consolidates recent reports from COMEX and the Council of Europe, all of which have been hugely critical of the British Government regarding the failure to implement legislation as was previously promised. We will continue to lobby local and international bodies on the issue of language rights, which are already enjoyed by many across Europe.”

“Language rights are internationally recognised and codified. Those rights have already been enshrined in international law. The European Charter for Regional and Minority languages, The Framework Convention for the Protection of National Minorities, and the International Covenant on Economic, Social and Cultural Rights, have all been ratified by the British Government. Unfortunately, as the Conradh na Gaeilge research has highlighted, local authorities currently struggle to fulfill their modest duties as per those treaties. Much of this is excused by the absence of domestic law here in the north, which fails to provide the legal recognition for Irish here. As was pointed out throughout the ELEN General Assembly and by many of our European colleagues, without domestic legislation and official status for Irish here, there remains a huge deficit regarding language rights and services for the language community. This must change.”

Official pictures from the ELEN General Assembly in Dublin can be accessed here and are free to use: https://bit.ly/2DriR31

Further information on ELEN can be accessed at: www.elen.ngo