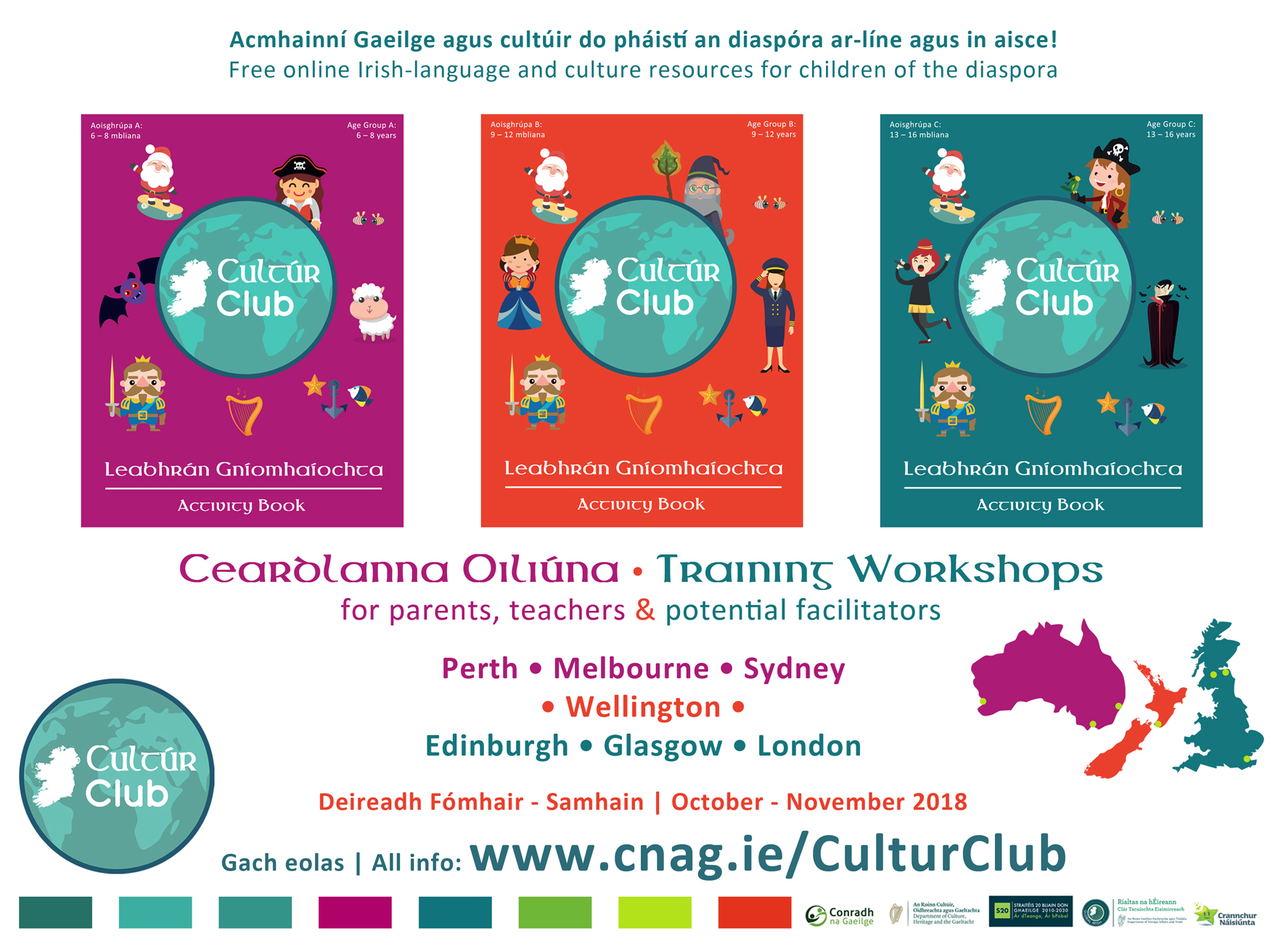 Government Chief Whip and Minister of State for the Irish Language, the Gaeltacht and the Islands, Joe McHugh TD, will officially launch Conradh na Gaeilge’s international Cultúr Club project on Wednesday, 3 October 2018. The first series of free Irish-language and culture activity books for children of the Irish diaspora are now available online at www.cnag.ie/culturclub.

International Irish students from St. Andrew’s College in Booterstown, Co. Dublin will enjoy live music and take part in a calligraphy workshop as part of the launch, to showcase the variety of Cultúr Club workshops the project envisages can be run worldwide.

Welcoming the launch, Minister of State for the Diaspora and International Development, Ciarán Cannon TD, said:

“The Government is committed to nurturing and sustaining Irish communities around the world, and Cultúr Club aims to help foster a stronger sense of Irish identity among diaspora of all ages. These initial activity books will help young Irish children connect with their language in a new and engaging way, no matter where in the world they are currently living.”

Minister of State for the Irish Language, the Gaeltacht & the Islands, Joe McHugh TD, said:

“The Government is delighted to support Cultúr Club, a community-led project that ensures the unique language and cultural heritage of Ireland is passed on to future generations of young Irish people everywhere.

“I hope these Cultúr Club resources will be a valuable building block for everyone already doing Trojan work to promote Irish at home and abroad, sparking creativity and new ways of teaching Irish everywhere.”

The initial three Cultúr Club activity books cover 12 themes of Irishness and are aimed at children of the diaspora aged six to eight, nine to 12, and 13 – 16 years old. They were developed by Conradh na Gaeilge with a view to providing enough material for local facilitators to run monthly Cultúr Club workshops for children in their own area anywhere in the world.

Cultúr Club also includes step-by-step guidelines for teachers, parents, and other would-be workshop facilitators, as well as a database of useful resources and teaching materials. 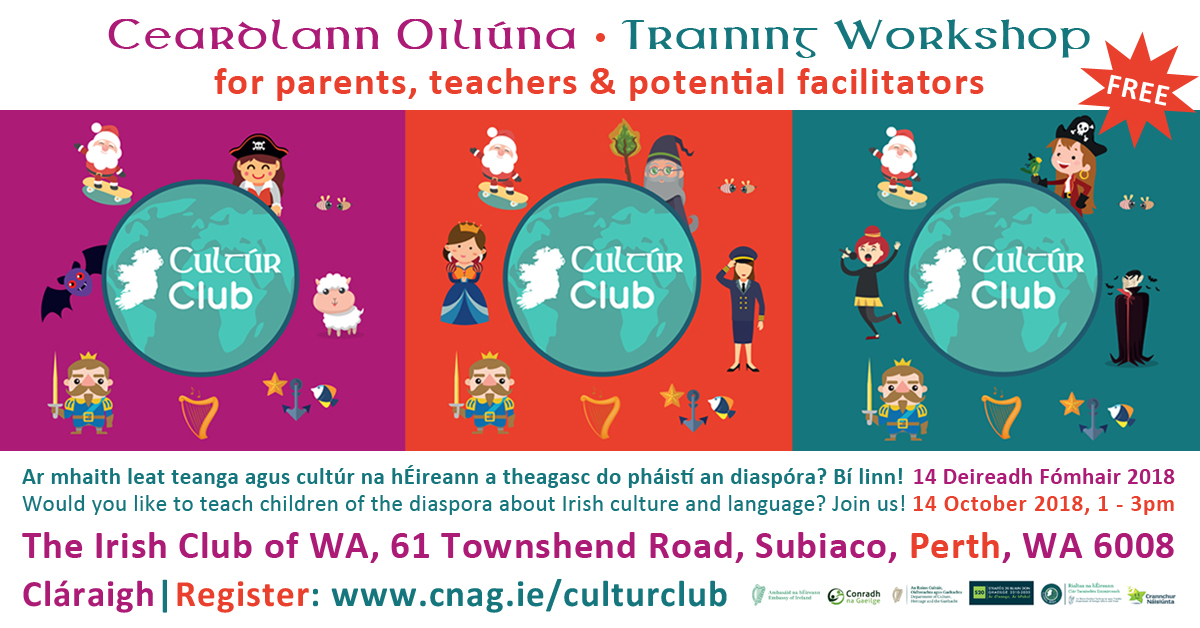 Thanks to funding from the Embassy of Ireland in Canberra and the Consulate General of Ireland in Edinburgh, Conradh na Gaeilge is trialling the Cultúr Club activity books with a series of pilot schemes in Australia, New Zealand, and Great Britain to train local facilitators and collect feedback later this year.

“As we celebrate 125 years since the founding of the Conradh with Bliain na Gaeilge in 2018, it is fitting that we are launching a new and exciting initiative such as Cultúr Club to reach out to Irish speakers worldwide.

“With over 180 branches and numerous individual members registered around the globe, every member of Conradh na Gaeilge works hard to promote the use of Irish within their own communities, from Hong Kong to Canada and from Carntogher to Cúil Aodha.”

Potential workshop facilitators and teachers from as far apart as Kuala Lumpur and Singapore in Malaysia to Australia, India, the United States and Canada have already expressed interest in the Cultúr Club materials, and Conradh na Gaeilge expects that the free resources will be in high demand.

“Cultúr Club will give our branches abroad and other Irish speakers overseas the means with which they can promote the language and culture of Ireland to a whole new generation of the Irish diaspora.”

The long-term vision Conradh na Gaeilge has for Cultúr Club includes a network of international Irish-language cultural hubs and Saturday schools for children abroad as well as support packages for new parents, international children’s camps, holiday package deals for Irish-speaking families and adult language learners in the Gaeltacht, and Irish-language resources for older members of the diaspora suffering from memory disorders, to help them reconnect to the Irish they learned when they were younger.

As a first step, Conradh na Gaeilge is inviting parents, teachers, potential workshop facilitators and community groups around the world to download the free Cultúr Club activity books and materials from www.cnag.ie/culturclub and to set up their own local Irish-language and culture classes for kids.

Piloted by Conradh na Gaeilge in partnership with the Consulate General of Ireland for Hong Kong & Macau in 2016, the Cultúr Club project has received funding from the Department of Foreign Affairs & Trade’s Emigrant Support Programme (ESP), the Fulbright Commission of Ireland, the Department of Culture, Heritage & the Gaeltacht’s Scéimeanna Tacaíochta Gaeilge as part of the 20 Year Strategy for the Irish Language, and the National Lottery. Free Cultúr Club training sessions are scheduled for Perth, Sydney and Melbourne in Australia this October, with a further workshops planned for Wellington, New Zealand; for Glasgow, West Dunbartonshire and Edinburgh in Scotland; and for London in November 2018. www.cnag.ie/culturclub

Conradh na Gaeilge is the democratic forum for the Irish-speaking community. The Conradh has over 180 branches and numerous individual members registered around the world, members that work hard to promote the use of Irish in their own areas. Also known in English as The Gaelic League, Conradh na Gaeilge was established by Douglas Hyde, Eoin Mac Néill, and their colleagues on the 31st of July 1893. The organisation runs Irish-language courses; advocates for the language rights of Irish-speakers; raises awareness about the language; hosts the international Irish-language festival Seachtain na Gaeilge; manages the Irish-language information hub PEIG.ie and the Irish-language bookshop An Siopa Leabhar; supports Raidió Rí-Rá; and much more. www.cnag.ie

Bliain na Gaeilge is celebration of the Irish language and a community project that has over 50 Irish-language, Gaeltacht, and cultural groups taking part in its organisation, including the GAA, TG4, USI and RTÉ. The Government of Ireland is also officially supporting Bliain na Gaeilge and a committee has been formed to coordinate that support. The Department of Culture, Heritage & the Gaeltacht is providing funding via Foras na Gaeilge for the year. Throughout the festival we will celebrate through action on five themes: the revival of the language over the last 125 years; the creativity of the language; the vibrancy of the language; the participation of the community; and the value of our Gaeltachts. www.gaeilge2018.ie

St. Andrew’s College Dublin was founded in 1894 by members of the Presbyterian community in Dublin. The school community numbers over 1,300 students, teachers and support staff, drawn from Ireland and 40 other countries. There is a distinctly international atmosphere in the school and, since 1984, we have been accredited by both the Council of International Schools and the New England Association of Schools and Colleges. www.sac.ie