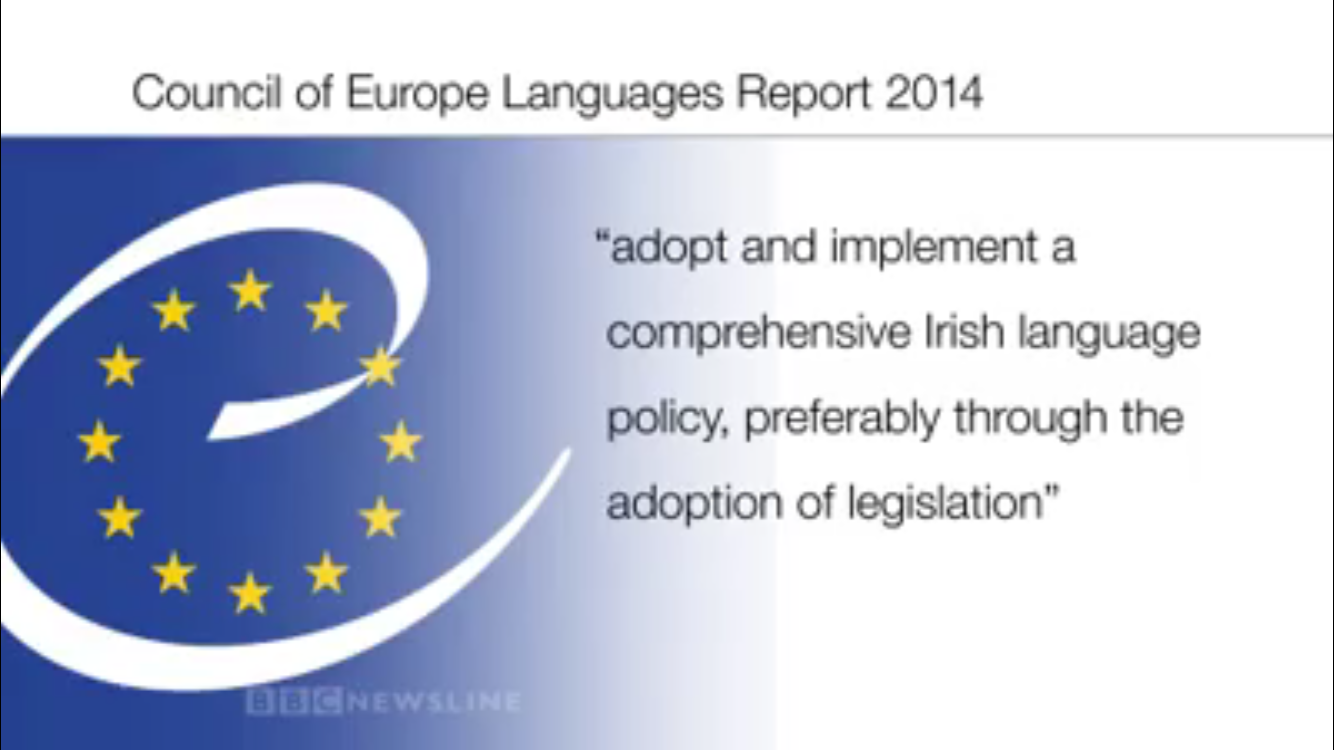 During a meeting with the Council of Europe Committee of Experts (COMEX) today (14 May 2018) in Belfast, Conradh na Gaeilge highlighted the consistent failure of the British Government and of the Assembly previously regarding the implementation of the European Charter for Regional and Minority Languages (ECRML). COMEX are in Belfast today on their 6th Monitoring visit since the British Government ratified the ECRML in 2001.

Today’s COMEX visit follows a similarly themed Council of Europe Report (21 February 2018) regarding the Resolution on the implementation of the Framework Convention for the Protection of National Minorities by the United Kingdom, which recommended:

Conradh na Gaeilge made it very clear today to the COMEX delegation that the British Government have failed in their duties regarding the implementation of the European Charter for Regional and Minority Languages here in terms of the Irish language provision, and have, to date, failed to implement the legislation that they had promised to introduce as part of the 2006 St Andrew’s Agreement. In each of the previous monitoring reports published by COMEX in relation to the Irish language, they have strongly criticised the British Government for their lack of compliance and lack of action on these issues, stemming almost twenty years. These reports have also consistently referenced the outstanding commitments regarding rights-based legislation here. We fully expect the coming report to include the same criticism, conclusions and recommendations. Conradh na Gaeilge call on the British Government to finally take note of the COMEX report and to take the ‘resolute action’ promised to ensure to promotion and protection of the Irish Language here.

Conradh na Gaeilge is also in the process of submitting a written submission to COMEX and recommends that both community groups and individuals submit similar deputations. Interested parties can contact Conradh na Gaeilge for further information.

At the same time this morning (Monday 14 May 2018) Conradh na Gaeilge was present at Belfast City Hall for the launch of the new Belfast City Council Language Strategy 2018-23.

Conradh na Gaeilge welcomes the launch of this new 5 year language strategy by Belfast City Council today, especially the provisions regarding the Irish language. Belfast is widely recognised for it’s on-going contribution to the community-led Irish Language revival and is home to an ever-growing number of Irish-medium schools, learners and speakers. In recent years however, Belfast has been falling behind in terms of local Council provision and recognition, in comparison with other local council policies, which was in contravention with international standards as outlined in the European Charter for Regional and Minority Languages and other treaties.

The launch of the Language Strategy today however, adds to several historic steps taken by the Council in recent times, as per their Linguistic Diversity Policy launched in 2017 and most recently the advertising of a full-time Irish-language Officer within the Council.

As was highlighted by today’s guest speaker, Professor Janice Carruthers, QUB, at the launch of the Language Strategy, this is the only place on these islands that does not have language policy at state level, as exists in the south, in Wales and in Scotland. The only satisfactory resolution to this in terms of the Irish Language is the implementation of protective legislation alongside a Strategy to protect and enhance the development of the Irish language, as have been previously promised.

For further information on the Committee of Experts from the Council of Europe (COMEX) and the on-going monitoring round regarding the European Charter for Regional and Minority languages, see: