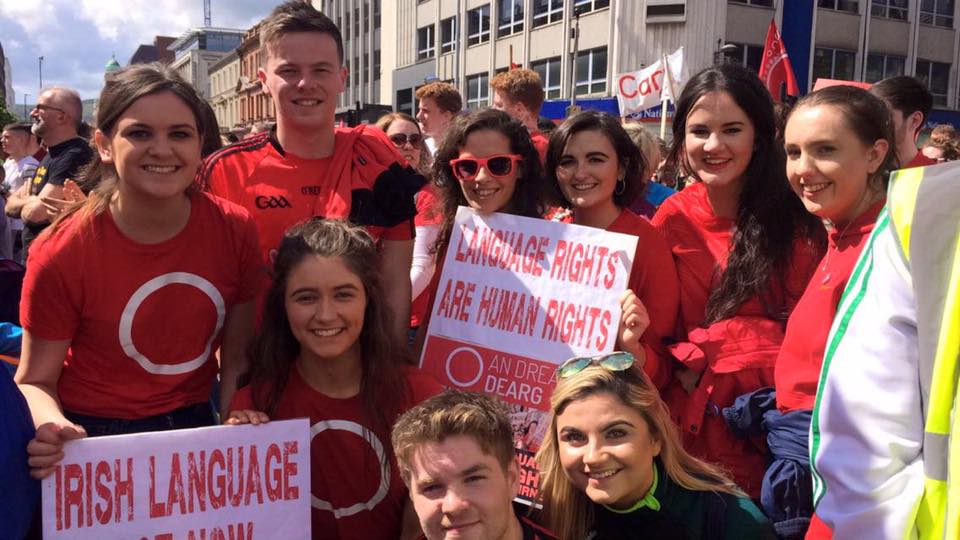 In a response issued by the Vice-Chancellor of Queens University Belfast to the University Irish Language Society this week, the Irish language has been categorised as a “language likely to be provocative, offensive or intimidatory.” The statement and quoted policy seems to contradict international guidelines and best-practice around the promotion and protection of minority languages, the visibility of indigenous minority languages as well as also contradicting the guidance from our own Equality Commission and also the Council of Europe.

There are some big questions to be answered here around QUB’s understanding of the role of the Irish Language, and their policy which seems to contradict guidelines from international bodies such as the Council of Europe. The correspondence from the University expresses their wish to ‘create and sustain a neutral working environment’, and indicates this is the reason for not promoting the Irish Language on campus, which is totally out of touch with the clear advice from the Equality Commission, which states that the “use of minority languages, particularly Irish or Ulster Scots languages… would normally and objectively be considered a neutral act that would not be discriminatory.” Ironically, the QUB Equality and Diversity Policy does little to promote or protect linguistic equality or diversity regarding the Irish language community on campus.

Conradh na Gaeilge supports the students and the Cumann Gaelach as they lobby for change within the Univserity. Bilingual signage was in place in QUB until it was removed in 1997 and it is now time for the University, given the huge growth of the language community here in Belfast and the international commitments regarding the language and visibility of the language here, to get up to speed and facilitate equality and language rights. This case is another clear example of the need for protective legislation for Irish, one that gives very clear, unambiguous guidelines for public bodies and institutions in terms of promoting and displaying the Irish Language.

Last year USI (Union for Students Ireland) ran motion supporting the introduction and implementation of an Irish language Act here. Furthermore, the Students Union in Queens itself also ran a motion last year supporting an Irish language Act and the community campaign for language rights. It is clear that the demand for increased visibility of the Irish language on campus comes directly from the university community itself and it’s students. It is now time the University listened to their concerns and implemented the necessary change.

The original letter sent from the QUB Irish Language Society to the QUB Vice-Chancellor can be found here: https://www.facebook.com/ancumanngaelachqub/posts/734265240031227

The response from the QUB Vice-Chancellor to the QUB Irish Language Society can be found here:

The Equality Commission statement on the Irish Language can be accessed below:

In 2013, the Commission reiterated that the use of minority languages, particularly Irish or Ulster Scots languages in Northern Ireland, for common or official purposes, would normally and objectively be considered a neutral act that would not be discriminatory.

The Commission placed on record its view that a specific language statute is an appropriate mechanism of protection for the Irish language.