Irish a global language, with over 50 countries already taking part in #TrasnaNadTonnta

Irish a global language, with over 50 countries already taking part in #TrasnaNadTonnta 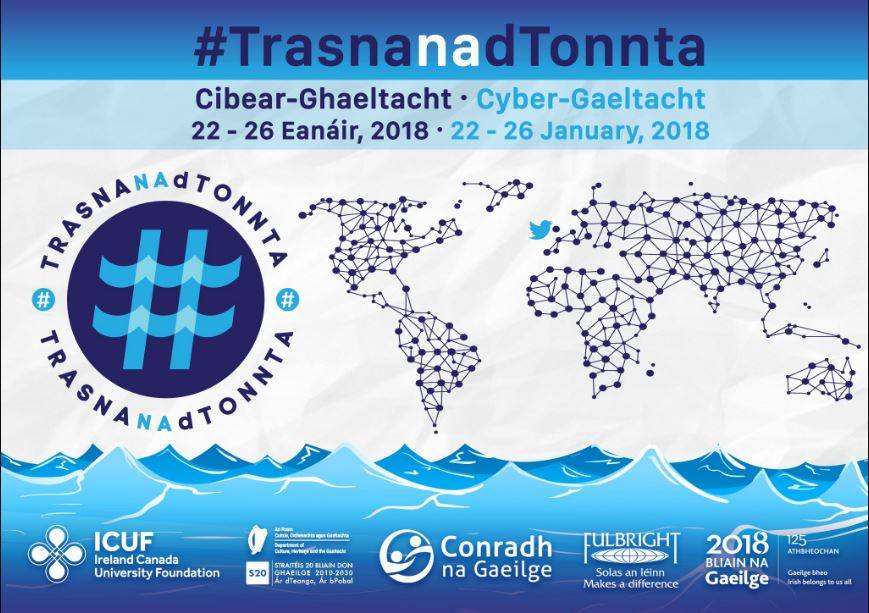 Thousands of Irish language speakers all over the world will this week be taking part in an international campaign as part of Bliain na Gaeilge 2018. The aim of #TrasnaNadTonnta is to encourage people the world over to use their Gaeilge on Twitter. The campaign first took place last May by educational organisations ICUF and Fulbright, and Bliain na Gaeilge are delighted to be able to support the campaign this year.

It all kicked off yesterday morning, Monday 22 January, and already over 2,500 tweets have been tweeted from more than 50 countries. The campaign will continue until this Friday 26 January, and it is expected that twitter users all over the world will be taking part by including the hashtags #TrasnaNadTonnta and #Gaeilge2018 in their tweets.

The objective of Trasna Na dTonnta is for learners and fluent speakers scattered across the globe to use and celebrate the language on Twitter for the week. The campaign was a huge success last year, with 3 million impressions on Twitter and over 13,000 visitors to the Trasna na dTonna profile throughout the duration of the campaign. Following the success of last year, the Government are now supporting the campaign as part of the 20-Year Strategy for the Irish Language - with Taoiseach Leo Varadkar being one of the first to tweet his support for the campaign Monday morning.

Over 70 ambassadors in different countries have already agreed to take part, from Glasgow, Scotland to Cairo, Egypt.

“I love using my Irish on social media and I’m really looking foward to taking part in Trasna na dTonnta. I was an ambassador last year too, and as well as that this year I’ll also be taking over the @ireland account for the week which is going to be lots of fun.”

As part of the campaign there will be a competition during the week for the best photo tweeted along with the hashtags #TrasnaNadTonnta and #Gaeilge2018, and the winner will receive a prize of €100 sponsored by Bliain na Gaeilge.

“Trasna na dTonnta is one of the first campaigns of the year and the fact that it’s an online campaign holds huge relevance. The Irish language has a certain vibrancy online and we’re hoping to promote this during the year with the hashtag #Gaeilge2018. Bliain na Gaeilge is an international celebration and Trasna na dTonnta provides those overseas with an opportunity to play a central role in one of the festival’s events.”

Trasna na dTonnta is a new initiative founded by the Ireland Canada University Foundation and supported by The Fulbright Commission and Conradh na Gaeilge. ICUF and Fulbright are funded by the Department of Culture, Heritage and the Gaeltacht.

This email address is being protected from spambots. You need JavaScript enabled to view it.

Manager,ICUF
This email address is being protected from spambots. You need JavaScript enabled to view it.

This email address is being protected from spambots. You need JavaScript enabled to view it.

Gaeilge Bheo | Irish Belongs to Us All #Gaeilge2018