30,000+ Students & Every County in Ireland Taking Part in Gaeilge24 Challenge 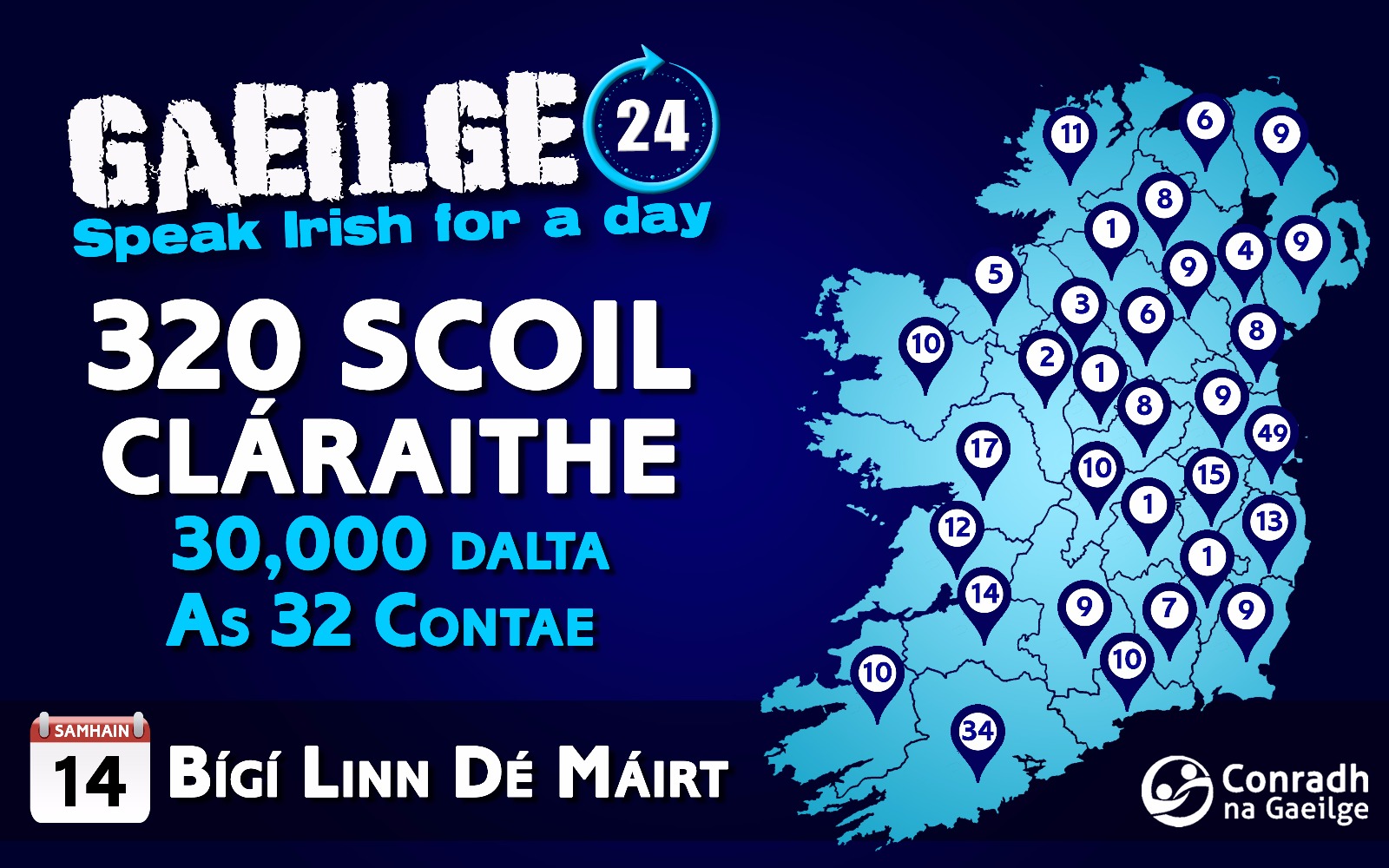 On Tuesday, 14 November 2017, over 30,000 pupils in more than 320 schools across Ireland will take part in this year’s Gaeilge24 challenge, coordinated by Conradh na Gaeilge. For the first time ever, at least one school in each of the 32 counties in Ireland will be involved in Gaeilge24 and every participating student will receive a certificate of involvement.

The aim of Gaeilge24 is to inspire young people to speak only Irish for 24 hours on a particular day, wherever they are and whatever they are doing. This is the fifth year of this unique annual challenge and Gaeilge24 continues to go from strength to strength.

“The Gaeilge24 challenge helps to open the minds of young people to the language in a relevant and enjoyable way, and gives them a positive experience of using Irish in their own lives,” says Dr Niall Comer, President of Conradh na Gaeilge.

“We have students the length and breadth of Ireland all taking part in Conradh na Gaeilge’s latest Gaeilge24 challenge, from primary schools and post-primary schools, English-medium and Irish-medium schools, Gaeltacht schools and non-Gaeltacht schools,” says Dr Comer. “More importantly, it is the Gaeilge24 participants themselves – the students – that promote and spread the use of the Irish language within their own communities, encouraging other people to talk to them in Irish and supporting all those around them to use whatever few words of Irish that they might have throughout the day.”

Not only do students speak Irish at school and with their teachers, but Gaeilge24 shows them that they can use the language at home, in shops and with local businesses, with their friends, around their hometown, in their sports club, and with their families too.

According to last year’s feedback, 96.4% of teachers indicated that they would happily run Gaeilge24 in the school again. Referring to the 2017 Gaeilge24 challenge that she organised in St. Enda’s College in Galway last year, Tammy Ní Laoire said:

“Gaeilge24 inspired an amazing atmosphere between the students and the teachers that took part in the event in St. Enda’s College in Galway. The day was full of fun and it certainly helped to increase the appreciation of the language in school. You could feel the huge sense of pride among all concerned, and even teachers that didn’t take part last year were saying that they would love to be involved next time around!”

Máirtín Ó Gormlaithe is an Irish teacher in Lismore Comprehensive School in Co. Armagh – just one of the schools that took part in the challenge last year – and he believes that Gaeilge24 shows the students that Irish is not just a school subject, but a living language that is used daily countrywide.

The students raise money to pay for the support packs that they receive on the day, and any profit from the day goes towards the registered charity Conradh na Gaeilge to support the promotion of Irish throughout Ireland.

Irish speakers around the world can also take part in the challenge online by using the #Gaeilge24 hashtag on Twitter.