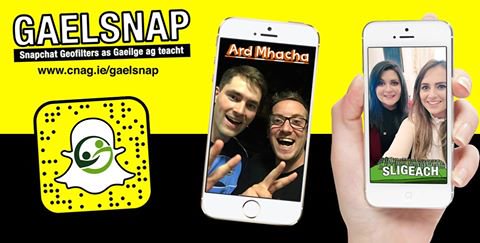 Over 10 million Snapchats have been sent with the Irish-language community geo-filters since their release across Ireland on Snapchat last month, with the Gaeltacht counties of Cork, Galway, Kerry, and Donegal topping the poll for usage.

Last month, Snapchat was added to the ever-growing list of international tech companies using the Irish language when 32 community geo-filters were released by the social media organisation in conjunction with Conradh na Gaeilge at the start of August.

“Irish-language snaps have now been seen over 150 million times thanks to Snapchat’s community geofilters as Gaeilge. These kind of figures defy the tired, old and unfounded cliché that Irish is somehow a “dead” language and present us with a much more positive insight into Irish-language usage by young people in Ireland today.

“Conradh na Gaeilge wants to thank all of the Gaelsnap designers at the heart of this community effort, all of whom put in a huge effort to create the 32 geo-filters for each county as well those whose designs did not make it to Snapchat.”

Usage statistics available to Conradh na Gaeilge show that Cork has the highest number of uses with 920,000 Snapchats using the Irish-language community geo-filters in the county and over 15,300,000 impressions generated. Galway follows in second place with 870,500 uses and 16,200,000 impressions, Kerry in third and Donegal in fourth, meaning all top four are counties with Gaeltacht communities.

“It’s fantastic that 10 million snaps have been sent with a geo-filter as Gaeilge in the space of a month. It shows how popular the Irish language is on different social media platforms, and it has been great seeing social media influencers such as James Kavanagh, Pippa O’Connor Ormond and Doireann Garrihy using the geo-filters as Gaeilge.

“It’s also great to add Snapchat to the list of every growing social media platforms and private enterprises that provide services in Irish. Irish-language options are now available and in use around the world on Facebook, Twitter, Gmail, and Wordpress thanks to the work of community translators.”

To send a snapchat with an Irish-language community geo-filter, you can take a picture on Snapchat and then swipe to view the selection of available geofilters including the one for your area as Gaeilge. Make sure you have the latest Snapchat update installed and your location services turned on. Some places with higher populations and a choice of a lot of community geo-filters have the Irish language filters on rotation and therefore the Irish geo-filter might not always be available.