This marks the end of 10 years of community campaigning with politicians and a significant achievement, in particular the provision proposed by the Conradh that by 2030 20% of those recruited to the public sector will be proficient in the Irish language.

“Conradh na Gaeilge would like to pay special tribute to all members of our organisation and to all others in the Irish language and Gaeltacht community who stood firm against the very weak proposals for legislation from the Governments between 2011 and 2016, who ensured the independence of the Office of An Coimisinéir Teanga, and who ensured, between 2017 and 2021, legislation with a sound basis and an opportunity to achieve satisfactory Irish language services for the Irish language and Gaeltacht community in the future. We would also like to acknowledge and pay tribute to the President of Ireland, the current Minister, the Gaeltacht Ministers and other Government Ministers who have supported a strengthening of the Act over the years, the politicians in opposition (especially members of the Oireachtas Committee for Irish Language, Gaeltacht and the Irish Speaking Community), the Language Commissioners, the staff in the Department of the Gaeltacht and others who played a role in the development of the Act.”

“It is no exaggeration to say that over the last 10 years we have come a long way in updating the Official Languages Act. We started out defending the independence of the Office of An Coimisinéir Teanga and opposing the weakening of the Official Languages Act 2003. The Conradh did this in partnership with Guth na Gaeltachta in 2011 and, over the next 10 years, with many other groups and individuals in the community and with many politicians who supported the changes we were calling for. Progress has been made. Not only did we succeed in keeping the Office of An Coimisinéir Teanga independent but the following was achieved in the amended Act:

The Conradh is in no doubt that there is a huge challenge ahead and that continued pressure will be required to ensure that a satisfactory and ambitious National Plan is formulated and fully implemented, as well as all the implementation of the other provisions in the Act. Conradh na Gaeilge will continue to push to achieve this and will encourage continued participation from the community.”

+353 86 8142757 This email address is being protected from spambots. You need JavaScript enabled to view it.

Below is a timeline for the development of the Official Languages Act 2019 (Amendment): 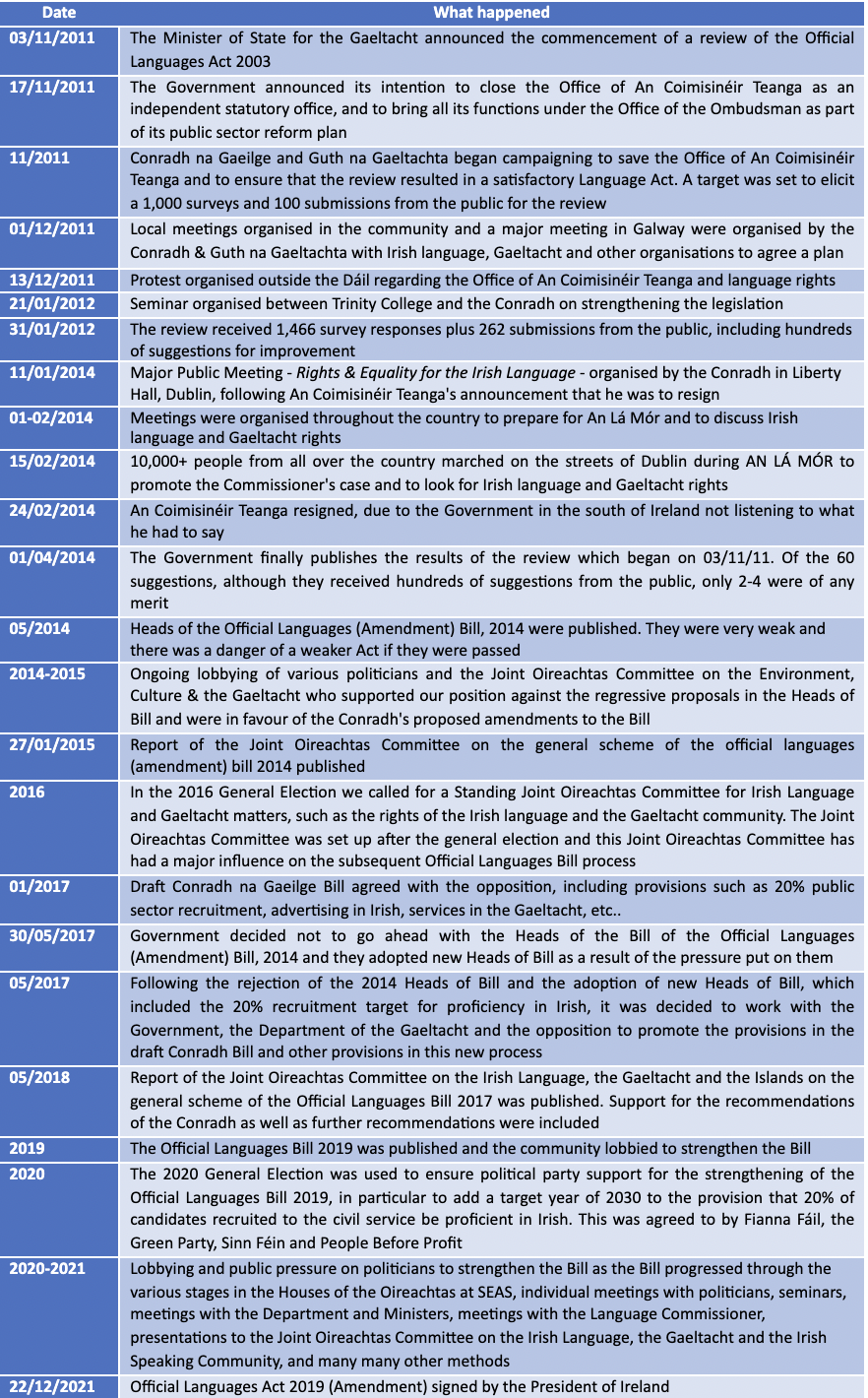