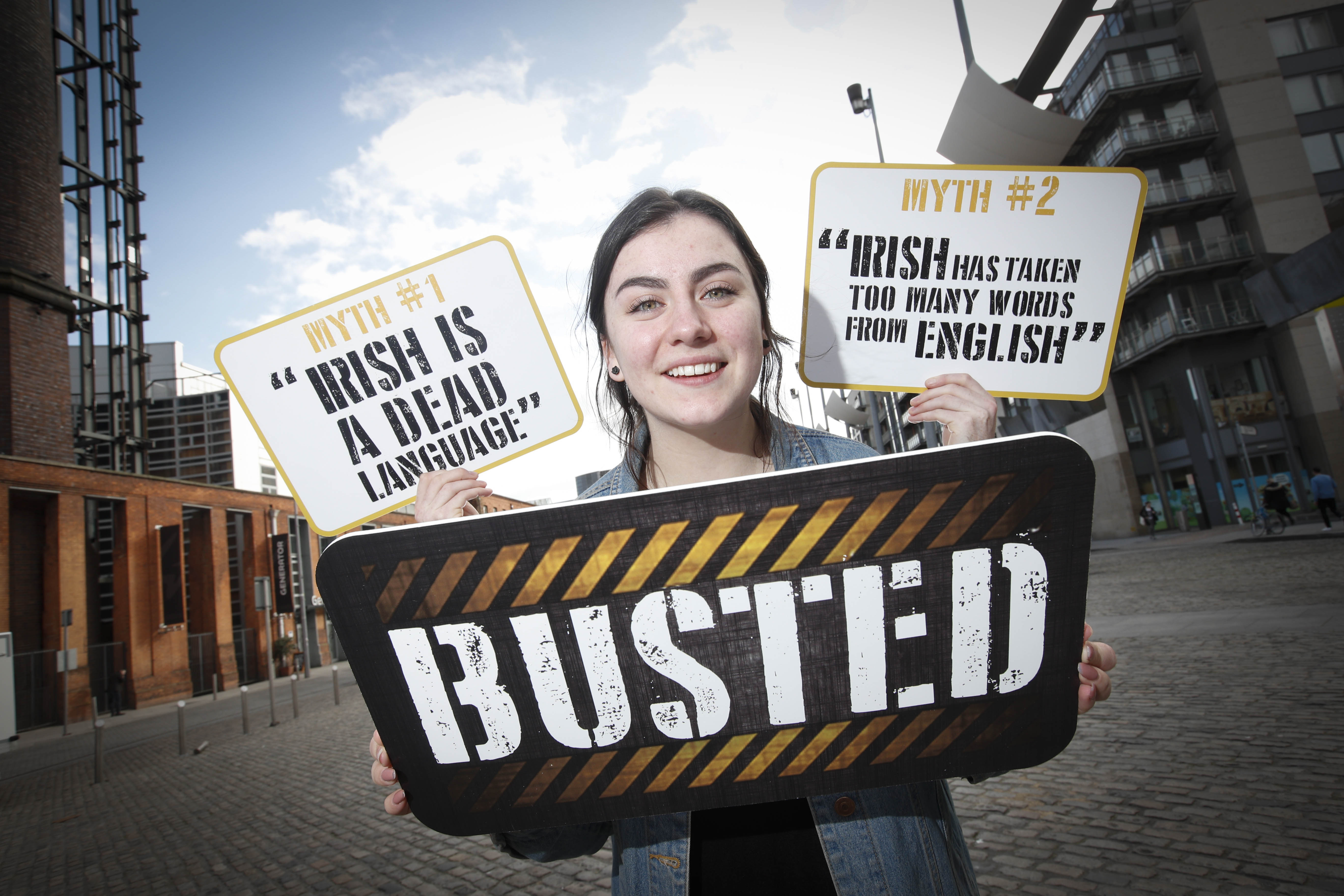 There are many myths surrounding the Irish language; some of these are centuries old while others have only developed in more recent times. Conradh na Gaeilge is working with Colm Ó Broin to set the record straight about some of the most common misinformed 'alternative facts' about Irish.

Colm Ó Broin is available to give public or private talks, in Irish or in English, to groups on the questions arising from the Mythbusting campaign. Colm has already spoken in Gorey Library, Wexford; in Clonsilla, Dublin 15; in Áras na nGael, Galway; and in the University of Ulster in Belfast, Co. Antrim.

Here is a video of the TEDx Talk Colm gave in Ballyroan Library recently:

If you'd like to organise a talk with Colm in your own area, contact us at This email address is being protected from spambots. You need JavaScript enabled to view it..

Census figures from the Republic of Ireland and Northern Ireland show that almost 2 million people have some knowledge of the Irish language. A Millward Brown survey from 2015 showed that 1.2 million people in Ireland are confident in their ability to speak Irish. In terms of fluency, the Irish Language Survey carried out by Amárach Research in 2013 showed that almost 500,000 people across Ireland can have a conversation in Irish and another 150,000 have “native speaker ability.” Even this figure would give Irish more fluent speakers than most languages in the world. According to the linguistic project, Ethnologue, half of the world’s languages have 7,000 or less speakers. So by any rational definition, the Irish language is far from being a "dead language" - Irish is alive and kicking.

Myth #2: "Irish has taken too many words from English"

Myth #3: “Ireland would be poor if we spoke more Irish”

Ireland is one of the wealthiest countries in the world, but some people think we would be poorer if we spoke Irish as we wouldn’t be able to trade with other nations. If you believe this, just ask yourself a very basic question – are there any rich countries in the world that don’t speak English as their first language? Looking at a global list of national wealth (GNI), this shows us that there are many non-English speaking nations that are wealthy - some of them are even richer than Ireland, like Denmark and Sweden. They’ve also been richer than Ireland for generations, meaning that they haven’t had the massive problems of unemployment and emigration that Ireland has had. There is no reason Ireland couldn’t be wealthy and successful if more of us spoke Irish.

Myth #4: “Gaelscoileanna and other Irish-speaking schools are elitist”

Over 50,000 children attend Irish-language schools, or Gaelscoileanna, outside of Gaeltacht regions in Ireland. Some of these schools are located in middle-class areas and for some reason, this has been used by people to claim that Gaelscoileanna in general are somehow ‘elitist’. However, children from every social class in Ireland attend Irish-medium schools. For example, over half of the primary-level Gaelscoileanna in Dublin and Belfast are in working-class areas. You can see this by looking at the locations of the schools on www.gaelscoileanna.ie. In recent years some people have tried to explain the growth in Irish-medium education as a result of racism, i.e. parents not wanting their children to be in the same school as children whose parents come from abroad. While there may be some parents who have this motivation, to stereotype all Gaelscoil parents as racists because of the actions of a few is prejudiced in itself. Irish-medium schools reflect the communities in which they are situated, and therefore include students from all classes and backgrounds in Ireland. Coláiste Ghlór na Mara in Balbriggan has children from over 15 different nationalities attending its multi-denominational school. Gaelscoil Nás na Rí in Naas not only has a buddy-system in place to support non-Irish parents sending their children to the school, but provides SNA support for pupils who come to the Gaelscoil with neither Irish nor English, as well as language classes for parents. Gaeloideachas provides information on immersion education through Irish for parents in a variety of languages including French, Russian, Polish, and Portuguese. Irish-medium education is available and welcoming to children from all backgrounds.

Myth #5: “Ireland would be insular if we spoke Irish”

Some people believe that Ireland would be insular, inward-looking or parochial if we spoke Irish. By this logic, more than 180 countries in the world would also be insular as they don't speak English as their first language. Speaking Irish doesn’t mean you can’t speak English or any other language to interact with people from other countries. In fact, studies have shown that learning a second language increases tolerance, and immersion education in particular fosters a "greater tolerance of cultural difference and less racism" amongst children. Starting with our own native language and culture, multilingualism gives us a greater sense of identity and increases our self-esteem while giving us both a broader exposure to, and appreciation of, the value of various cultures. This in turns leads to overall greater cultural competence and deeper multiculturalism, opening us up to the rest of the world.

Myth #6: "Ireland would be a more conservative society if we spoke Irish"

Would Ireland be more socially conservative or repressed if we were an Irish-speaking nation? A simple answer to this question is to look at some very interesting placenames in Ireland. These are places that have, believe it or not, sexual organs in their names - places like Tóin le Gaoth in Wicklow, Rath Bhod in a Sheasamh in Mayo, An Dá Chích in Kerry, Bod an Deamhain in Donegal and Baile Phite Méabha in Antrim. You can look up what they mean at www.focloir.ie - it wouldn’t be polite to write their meanings here as they are taboo…in English! It seems more likely that people who are socially repressed wouldn’t name places they live in after sexual organs, so the notion that Ireland would be a more conservative society if we spoke Irish is null and void.

Myth #7: “The Irish language has been ‘politicised’"

Irish is used by all political traditions in Ireland. Irish classes are taught in both traditionally unionist and nationalist areas of Belfast, for example, and international dignitaries of various political parties use Irish when visiting the country. President Obama translated his motto of 'Yes We Can' to the Irish 'Is Féidir Linn' when he visited Dublin, and Queen Elizabeth II spoke Irish on her state visit to Ireland. Her predecessor, Queen Elizabeth I, also produced the first book ever printed in the Irish language. The motto of the British Army's Royal Irish Regiment is Faugh a Ballagh, which means ‘Clear the Way’, while murals in Irish can be found in Orange Lodges. To quote Douglas Hyde, son of a Church of Ireland minister and a founder of Conradh na Gaeilge: "The Irish language, thank God, is neither Protestant nor Catholic, it is neither a unionist nor a separatist." This just shows that the Irish language is not owned by anyone, yet it can belong to us all - it can be learned and used by people of all political traditions.

Some people believe that the official status of Irish in the European Union is tokenism and a waste of money. According to the Directorate-General for Translation of the European Commission, the EU institutions employ translators and interpreters for all 24 of the EU's official languages, and they spend around €1.1 billion on these language services each year; that's less than 1% of the total EU budget. The cost of the entire language services works out at about €2.20 per year for every EU citizen - or less than 5c a week - an even tinier fraction of which is spent on the Irish language. And Ireland pays into this translation fund, whether the money is spent on Irish or not. Moreover, since Irish became an official language of the EU in 2007, more Irish has been spoken in the European Parliament than Estonian or Maltese. In some years, more Irish has been spoken than Latvian - a language with over 2 million speakers - and even Danish, which has over 5 million speakers. Irish is a real, working language of the European Union.

Myth #9: “The pronunciation of Irish names makes no sense”

A belief has grown in popularity lately that the pronunciation of Irish language names like Saoirse or Oisín is not phonetic or logical. Different languages pronounce words in different ways however, so it doesn’t make sense to pronounce Irish names with English pronunciation, just like we don’t pronounce French names like Francois or Pierre using English pronunciation. Moreover, many popular English names are not pronounced according to standard English phonetics, e.g. John, Sarah, Stephen, Graham – we only know how to pronounce them because we’ve heard other people saying them. This is the same reason people around the world can pronounce the name Seán, even though it’s an Irish-language name. Using Irish phonetics, names pronounced in the Irish language make perfect sense.

Gmail, Facebook, Linux, Joomla!, Mozilla Firefox, and Microsoft Office are just some of the software resources and programmes available in Irish. Twitter has only been translated to approximately 50 languages, and one of those is Irish. Over 2.6 million people from countries all around the world have downloaded the Duolingo app to learn Irish. Samsung provide predictive text in Irish as well as an Irish-language option for their smartphones, while a huge variety of apps in Irish are available on Android and iPhone. Kevin Scannell, Professor of Mathematics and Computer Science at St Louis University in the US, led the original open source Irish localisation of Mozilla and has developed an Irish spell checker, grammar checker, and thesaurus, as well as dictionaries and translation engines that support Irish. He is a member of the team that provides Irish localisations of a number of other important products such as Gmail, Twitter and LibreOffice. He founded the Indigenous Tweets project to promote indigenous and minority languages in social media, and announced in April 2015 that the one millionth tweet in Irish had been sent. Irish is one of the top 100 languages used on the internet and completely compatible with modern technology.

Conclusion: “We don’t have to speak Irish”

Having read the myths above you might be saying that, while they may be true, we still don’t have to speak Irish. And you’d be right; we don’t have to speak Irish. But then again, there are lots of things in life we do because we want to do them, and not because we have to. People in Ireland don’t follow the Irish rugby team because they have to, or because they’re the most successful or entertaining rugby team in the world - they follow them because they’re the Irish rugby team, and for no other reason. The Irish language is the same - we're proud of the things that help us express our sense of Irishness or affinity with Ireland.

Colm Ó Broin is an Irish speaker from Clondalkin, Dublin, and a member of Conradh na Gaeilge. He will be giving a series of talks around the country on myths about the Irish language as part of Seachtain na Gaeilge le Energia 2017. Details above.